Enough for most home networks

Innovium has just announced their Teralynx 8 25.6Tbps 112Gbps SerDes switch. As far as SemiAccurate is aware, this is the only device of it’s class that is fully programmable.

Innovium is a maker of switch silicon, not switches themselves. They claim to have about 24% of the 2019 50G SerDes switch market compared to Broadcom’s 75.3%, the rest are, well, you can do the math. With the Teralynx 8 switch, Innovium is upping the ante to 112Gbps per port and that doubling leads to a doubling of the switch capacity in general to 25.6Tbps. If you can’t do the math on your own, that means it is capable of 256 100Gbps ports.

More interesting is that there is external hardware to mux the streams to get as high as 800Gbps ports. You would obviously drop the port count to 32 but you also cut down on your wiring and management overhead for heavily used links. On it’s own the Teralynx 8 chip can support 256 ports of 10-400GbE, 512×56 with external hardware. In short it is more than enough to run most home networks even if you live in a large data center. 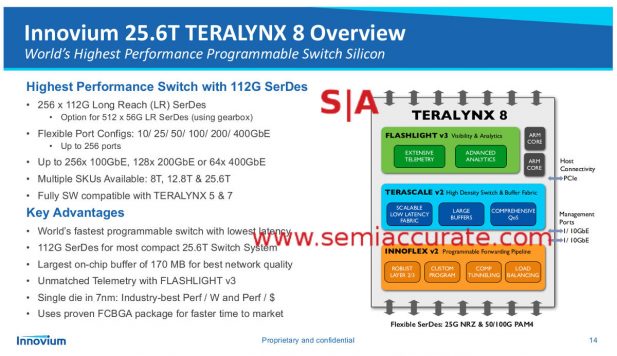 Innovium didn’t get in to too much detail about the chip itself but they did say it is made on TSMC’s 7nm process. The chip is also software compatible with their earlier Teralynx 5 and 7 parts which are on the market now. The Teralynx 8 has an HDK and SDK out this quarter with samples in 2H/20. This means the 25.6Tbps switch market should be heating up quite a bit next year.

As you might expect, the class of devices that use a Teralynx 8 switch chip aren’t going to be cheap, they are going to be a top of rack switch for high density, high bandwidth workloads and work up from there. Given that they are bleeding edge speeds with bleeding edge SerDes, you will probably pay a premium for them too. So why would you want to upgrade from a 56Gbps setup now? 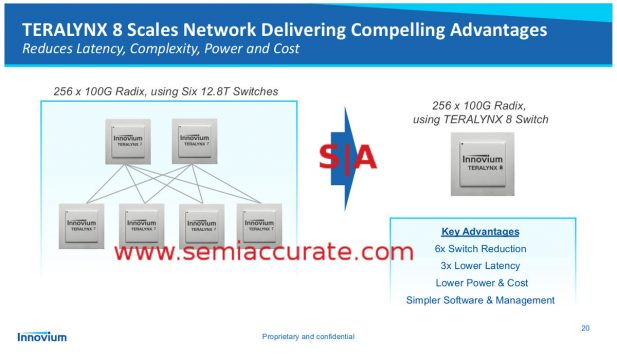 Six to one is usually worth a premium

` If you need the bandwith and ports, and any hyperscaler out there will, you can dramatically cut you switch counts, wiring counts, manageability overhead, and save quite a bit on running your data center. Innovium is also claiming that it will lead to higher density data centers but SemiAccurate feels the real impetus is coming from the advent of 5G. With 5G phones dropping in cost rapidly, the average consumer now has access to a multi-gigabit device at affordable prices. Something has to feed those things video clips and conspiracy theories, and that data path goes from the tower to the data center.

No matter what you ascribe the growth in bandwidth to, it is clear that there is a boom in data use at the hyperscalers. This data needs to be fetched, processed, and stored with as low latency as possible which means 112Gbps SerDes and high port counts are the way to go. Fitting in 1U and dropping cable counts means the ability to mux to 32 800Gbps ports or mix and match 100GbE and 800Gbps optical, both things the Teralynx 8 can do. However you use it, doubling of bandwidth is a good thing.S|A