Intel is close to honest on Ice Lake server dates

Intel has been promising Ice Lake server chips in volume by the end of year 2020 while SemiAccurate has been saying there was no chance. Actually we have been directly saying that they knew that timetable was only a PR stunt, now they are coming somewhat clean.

In Intel’s Q3 Analyst call slides, specifically slide 4, they have the following bit of useful information. 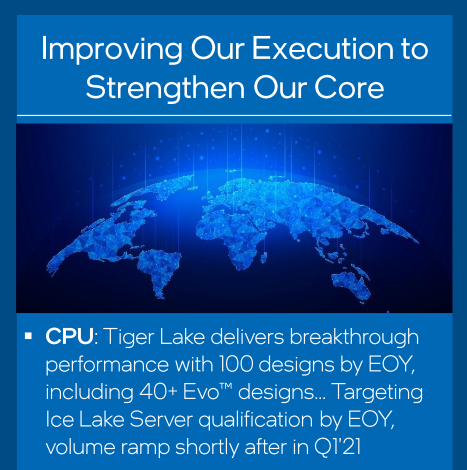 When does Q1 end again?

Please note that they are now saying no customer Ice Lake server in 2020 with “volume ramp” in Q1/2021. This is not the same as volume delivery which we said in no uncertain terms would START in March 2021. How did we know this? Intel was directly telling OEMs that when they were promising the public, mainly press and analysts, that it would happen in 2020. What changed?

Actually nothing changed, they are just being a little closer to honest now. As SemiAccurate said, once again here, the 2020 ‘launch’ was only a show to make 10nm production look less awful. Saner heads seem to have prevailed and now they are promising volume much closer to when they knew it would happen while the 2020 shipping for revenue pretense was still being pushed.

Since it would have been technically correct if they sold one unit for revenue this year we can’t say that claim wasn’t truthful. SemiAccurate actually thinks Intel will sell hundreds of times that volume in 2020, maybe even a thousand, but real shipments were always in March 2021 best case. They knew then, SemiAccurate readers knew then, and now everyone does. Why Intel keeps making barely technically correct claims that they know will blow up in their faces later, we can’t say. That said they really need to stop, it is getting too painful to watch.S|A