Today AMD jumps back into graphics performance leadership with their Radeon 6900XT GPU. While SemiAccurate doesn’t like the way AMD is half-launching three new GPUs, the products themselves appear to be class leading.

Lets start out with the down side, AMD is doing their noxious teaser almost-launch thing again so the mostly information free presentations mean far fewer people are going to read the ones that come out on Novemeber 18th when the 6800 and 6800XT launch, or December 5th when the 6900XT launches. The work needed to do the job right is not helped by the launch hype deprecating it, thanks guys!

The second bit is half good, half bad. If you recall our last piece on the Ryzen 5000 drip feed, you probably came away with the notion that we were not pleased with AMD’s lack of proper disclosure. Given how savagely AMD criticized Intel for doing less wrong in the past, this is simply unacceptable behavior. Since that time, AMD has done some things we can’t talk about yet that made us believe they actually get it, then we came to today and back we go to improper disclosure. In three pages of fine print footnotes there was only one that was done right. Because of this we urge you not to buy the numbers they give out because they aren’t recreateable. Come on guys, do the right thing.

Now on to the release of the three cards, the Radeon 6800, 6800XT, and the 6900XT. During the launch of their Ryzen 5000 line, AMD put up a teaser about the upcoming Radeon 6000 line with a few numbers that were in the ballpark of the Nvidia 3080 GPUs. Speculation was rampant but now we can say that the numbers released were for the lowest end 6800 that is being unveiled today. That part was right up there with the second highest Nvidia device on the market, If you haven’t guessed by now the two other cards are faster with the 6900XT beating the top line Nvidia 3090 in 5 of 10 titles at 4K resolution, tying it in 1, and losing by a little in 4. Not a bad comeback. 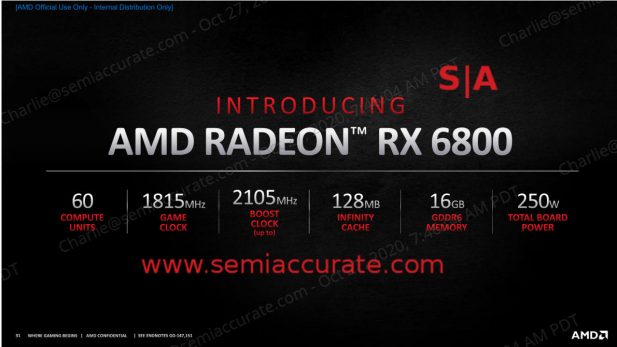 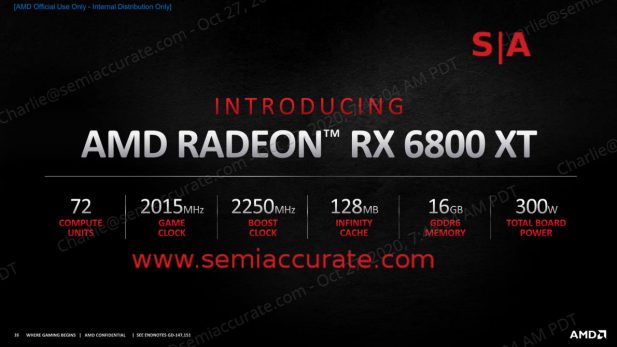 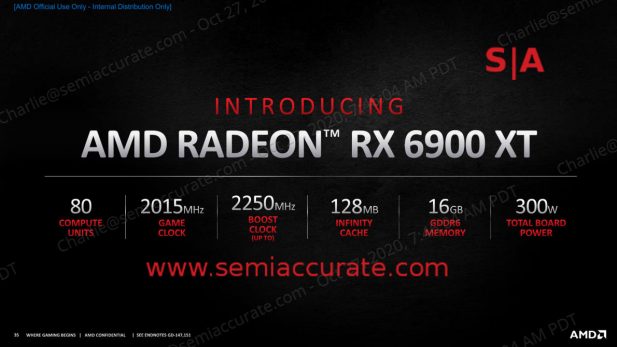 As you can see from the specs, all three cards have 16GB of GDDR6 which should give Nvidia’s memory-sparse devices a bit of a run for their money, depending on price of course. Clocks range from 1815 to 2015MHz base, 2105 to 2250MHz boost, and the trio has between 60-80 shaders. TDP goes from a low of 250W to a high of 300W which is significant because the Nvidia 3080 pulls 320W and the 3090 350W including the need for non-standard connectors. If AMD’s numbers hold up to real world testing, AMD should have a much more efficient card with better potential to overclock.

How did AMD do it? The 6000 series uses the new RDNA2 architecture, a tweaked 7nm process, and lots of love from the elves in Markham. All this gets them a claimed 30% frequency increase and a 54% better performance per Watt result, all at the same TDP as the 5000 series. Not a bad step up.

In their teaser deck, AMD talks about Infinity Cache and how paired with a Ryzen 5000 CPU, the system has full access to the GPU memory and Smart Access Memory. Asking whether or not these two things are related or what they actually do was greeted by a firm, “that will be disclosed later”. If we still care by that point we might write it up but AMD is sure getting good at pissing off those that want to know about their products. Same with DX Raytracing, is it the rumored hardware support or software?

There are a lot more on the software side but since it is Windows only, who really cares? These features might be nice but the fact that they are OS specific, and only a subset of OSes at that working with a subset of features on those OSes, it’s not worth the effort to go into them. One that looks nice is what’s called Rage mode, a one click overclocking tool that does enough to void your warranty even if AMD puts it in their drivers. If these tools ever make it to adult OSes, we will write about them but don’t hold your breath.

Update: AMD has clarified that Rage Mode does not void the warranty. Sanity prevails.

So in the end AMD looks to be on top again. If their numbers hold up to the real world testing that will happen in a few weeks, AMD will take the crown if only by a little. The 6800 looks to give Nvidia’s 3080 a hard time and the 6900XT does the same for the 3090 with the 6800XT falling somewhere in between. Pricing will make the final decision on value of course but AMD looks to be in a good place with the Radeon 6000 line.S|A