Reading between some very blurry lines

Intel’s stunningly successful Rocket Lake teaser went up yesterday with some curious claims. SemiAccurate dug into the details and a very interesting detail emerged about what Rocket Lake really is.

In yesterday’s article we went over the highlight, singular, and the lowlights, plural. One of the interesting bits we noticed was the GPU performance or lack thereof. As you can see below, Intel is claiming a 50% graphics performance lead over the now ancient 14nm Gen 9 graphics found in those two generation older devices. This compares unfavorably to the >2x GPU performance that the 10nm Tiger Lake achieves with the same GPU at a fraction of Rocket’s 125W TDP. 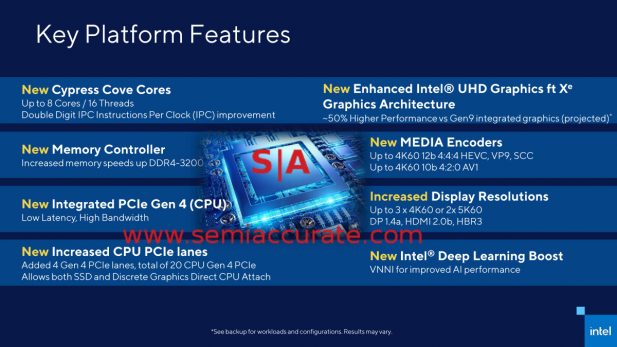 This can be explained fairly easily by the backporting process which brings out the worst of both architecture and process. While SemiAccurate can’t explain why Intel did this rather than using their tuned 14nm cores, we did point out why they were mistaken to even attempt it. While pondering the numbers and the vague wording of the above slide and a few others, something important clicked about the Xe graphics in Rocket Lake.