No reason for anyone to consider it at all

Today Qualcomm introduces the Snapdragon 7c Gen 2 platform and SemiAccurate doesn’t get it. There is nothing wrong with this SoC, we just can’t see a reason for it to be released.

If you are getting the idea that we are down on the 7c2, you would be right but not for the reasons you think. This device is an entirely adequate 8C CPU, and while Qualcomm wasn’t able to provide the details before we had to write, it likely mirrors the 7c-non2’s 2x A76 + 6x A55 config. The “informational” product briefs provided only list 8c at “Up to 2.55GHz”, it doesn’t even list big/little. Qualcomm really needs to do better with their “data” sheets, this is absurd.

Either way the 7c2’s clock appears to be up from the 7c’s 2.4GHz but both are grossly inadequate for the task at hand. It is built on an 8nm process which is a 10nm variant, almost assuredly Samsung’s, so it is two full nodes behind Qualcomm’s modern phone SoC’s and Apple’s M1. Even if Qualcomm didn’t saddle the 7c2 with ancient cores, the process node it is made on means it has no hope of competing much less winning at anything.

If that isn’t bad enough, we come to memory and storage. Memory is eMMC for cost reasons, something SemiAccurate understands on an entry level SoC, but tops out at 128GB. Remember this is supposed to be a full fat Windows box, think you can fit a usable install and education apps in that? With patches? OEMs are playing the ‘cloud’ game here meaning the platform is badly broken and there is no way to spin it as usable without distraction and hand waving. In another nod to it’s mobile heritage, DRAM tops out at 8GB. Since the 7c2 comes as a pre-built platform without PCIe lanes off the package, don’t look for expansion, there is only a single USB3.1 Gen 1 lane out. 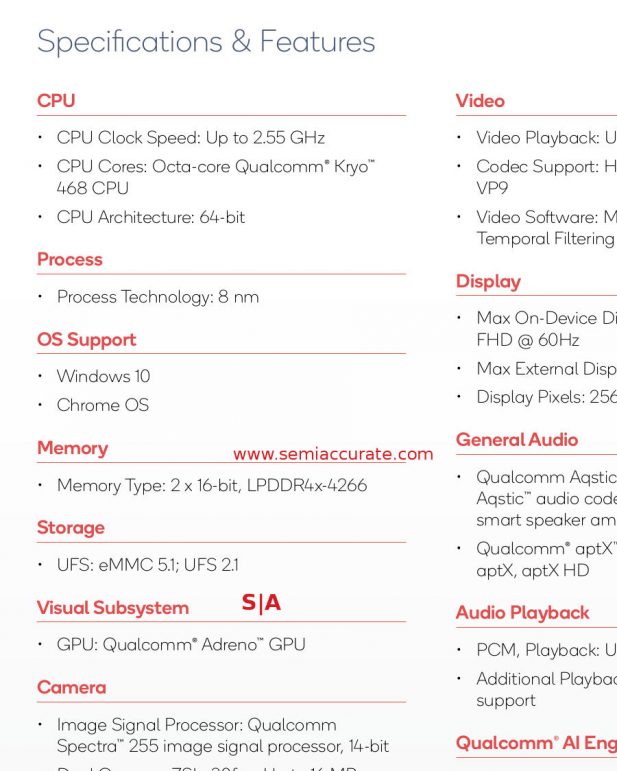 This should be embarrassing

The press briefing slides have the same ‘information’, but they do say it is faster and will support a 4K display. Ironically on the DSP side, hold on to your seats folks, they actually list the name of the block, Hexagon 692, be still my beating heart. Someone slipped that past legal, it has a bare minimum of information so jobs may be on the line.

The Spectra 255 ISP is a little better, it supports 4K30 10b image capture and had 14b internal image processing. It can support two cameras, one more than needed for laptops, at 16MP or one at 32MP. About what you would expect for such an old SoC, nothing bad and more than adequate for the task at hand, basically light duty video conferencing. If you wanted to reach for a silver lining, Qualcomm’s hardware and firmware are really good at image capture, even an older variant like this should punt Intel’s and AMD’s best into the weeds. If you can wait long enough for the app to load. Actually it probably won’t but more on that later.

On the I/O side you would expect the 7c2 to shine and it sort of does. It has an X15 LTE modem meaning 600Mbps down, an entirely adequate number. This is an entry level platform so those expecting 5G don’t understand the market. On the Wi-Fi side the 7c2 tops out at 802.11ac, no .ax here. Given the market segment Qualcomm is aiming for, basically education with non-technical buyers, the lack of .ax may hurt the device in dense environments like a classroom. That said it isn’t the end of the world and .ax is not going to be common in the segment for a while.

So overall on the hardware side we have an 2-3 year old phone SoC that was mildly tarted up and tweaked to be a ‘laptop’ part. The CPU performance was inadequate on release and hasn’t aged well, despite the ‘benchmarks’ that Qualcomm released, the competitive Intel parts should destroy the 7c2 in real world workloads, they are in a different league. Image capture is adequate, audio quality is likely class leading, and connectivity is solid, great if you use a WAN… on an entry level device.

The real problem with the 7c2, and all of Qualcomm’s compute offerings, is not the lack of compute power, it is how they are positioned. When they first launched the 8c/cx compute SoCs a few years ago, the lack of details included price. The press came to the conclusion that these devices would be a solid $3-400 computer for your grandmother or to keep in the bathroom in lieu of magazines. Then the details came out that the low end box, basically so crippled that it wouldn’t have room for Windows and an application, would start at more than 2x that range and the barely functional top end would be well over $1000. We laughed and wrote it off. 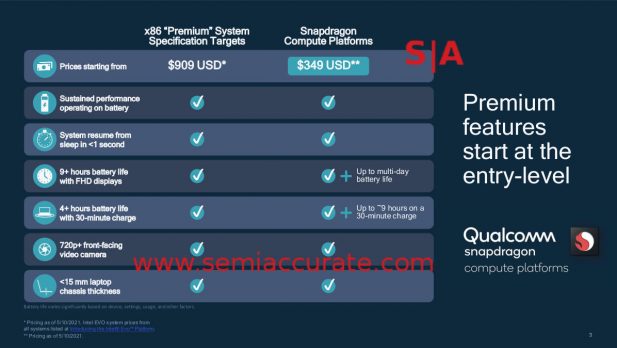 If you don’t got it, well this

The 7c2 brief has probably the most disingenuous slide SemiAccurate has seen in a long time. If you look at the slide above, you will see Qualcomm compares their 7c2 to ‘premium’ x86 offerings, in this case Intel’s Evil… I mean Evo branded high end devices. Qualcomm appears to put a link in to a page called “Introducing the Intel Evo Platform” but it doesn’t work. We’ll take their word for it that the lowest price laptop on that page is indeed $909. The $349 Qualcomm laptop is the Acer Chromebook Spin 513, specifically the CS513-1H-S60F, which appears to have had a price increase to $399 recently. It comes with 4GB of DDR4 and 64GB of flash, not enough to be usable much less ‘premium’.

Either way Qualcomm is comparing the highest end premium Intel laptops with Windows to the most barebones 7c-non2 Chromebook device and claiming victory. Do I really need to point out that things like barely adequate CPU power and enough storage to hold the OS and more than a single app are table stakes? Sure the metrics Qualcomm lists are nice to have but if the device literally can not function for the task at hand, thin is largely irrelevant is it not? If you take half the rated battery lifetime to boot and load an app, is it a win?

In a deep research session, basically the first device we saw on the Costco page, SemiAccurate found an HP 14″ laptop with 8GB of DDR4, a 256GB SSD, and a full Intel i3-1115G4 CPU which will utterly annihilate the 7c2 in just about every metric you could ask for. The price? The same $399 as the Chromebook Spin 513. It may miss out on one or two of the ‘premium features’ above but again, it will do the job needed. There are probably better deals out there for x86 Windows boxes if you actually look, don’t forget that the Qualcomm devices with Windows will up the price significantly, x86 is just in another league.

Then we come to software compatibility. SemiAccurate doesn’t run Windows nor does it have one of the Qualcomm boxes to test with, but people on the press call were asking when there would be a 64b version of Zoom for Qualcomm ARM PCs. The reply was the same, ‘coming soon’ for 64b Windows emulation that we have been hearing for years. It may be happening or it may not, but it is still as significant issue for Zoom and similar applicatios which are both at the core of the markets Qualcomm is targeting and the ‘benefits’ of the platform.

The last part is the connectivity, specifically cellular data, which Qualcomm points out is more reliable and often faster than Wi-FI. SemiAccurate completely agrees, LTE is the better way to go in most circumstances. Qualcomm doesn’t mention price though, any thoughts on how much running your PC on cellular data would cost, especially if you do a lot of video meetings like these devices are positioned for? A$349 device with a $249/month data bill is probably not a sane way to go about your work or school day. Oh yeah, almost forgot, that $349 Spin 513 doesn’t have a cellular modem, the variant with LTE starts at $599 and is not listed on the page linked above.

We could go on and on about the platform but we think you get the idea. The hardware was so underpowered as to be borderline useless at launch and the years have not been kind to it. The utter lack of any product specs show how painfully aware Qualcomm about this, something not helped by storage and memory caps that preclude basic functionality. When you look at pricing you can find significantly better x86 devices on the market for significantly less, risible comparisons to high end Intel laptops notwithstanding. There is no reason for the 7c2 to exist in the market much less be re-launched now. Qualcomm should have quietly packed the program in and waited for the Nuvia cores to get them back into the game, the current path just hurts their image. If you really want an ARM based laptop, buy an Apple M1 machine, it will emulate Windows faster than any Qualcomm CPU can run it natively. Going back to the silver linings, the 7c2 has good imaging and sound quality, so yay?S|A