Intel delays Sapphire rapids, or does it?

Looks more like a reallignment with reality from here

It looks like Intel is delaying Sapphire Rapids once again, or are they? The new date puts the chip release in Q2/2022 but realistically we are looking at Q3/2022, exactly when SemiAccurate said it would come out 18 months ago.

So what is the new update? In a recent blog, Lisa Spelman clarified what she said at Computex, Sapphire Rapids has ‘slipped’ from Q4/2021 to an unclarified date in 2022. More on specifics later, for now we would like to point out that SemiAccurate has been adamant that the Q4/2021 dates Intel has been promising for a year or so now was farcical. We would say they knew that there was no way this date would be hit but, well, we did that too.

So now with this ‘new delay’, why are we saying it isn’t really a delay, why give them the benefit of the doubt now? Quite simple, it looks to us like Intel is actually moving to align their roadmap with reality, call it an outbreak of honesty if you will. There is still a long way to go, more on that later, but a company doing the right thing should be pointed out. SemiAccurate will be cautiously optimistic and call it a trend. The long road crack will be explained when we cover the exact timings, everything that was said is technically correct but still a tad misleading in places. 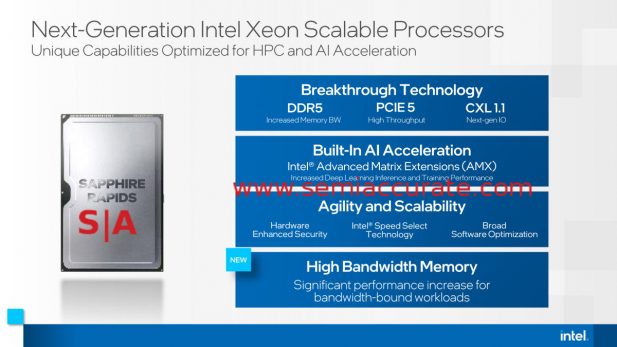 Now back to the good stuff. Yesterday at ISC’21, Intel released a little tidbit about Sapphire, that it has a HBM variant. This has been known for over a year as has the, up until today, Q4/22 release data, again more later. This is a good thing as well as the reiteration that Sapphire has AMX (Advanced Matrix Extensions), basically the next gen ISA for matrix math acceleration, and DSA (Data Streaming Accelerator). Both should help out in the AI and HPC worlds but we will reserve judgment until we see final numbers. 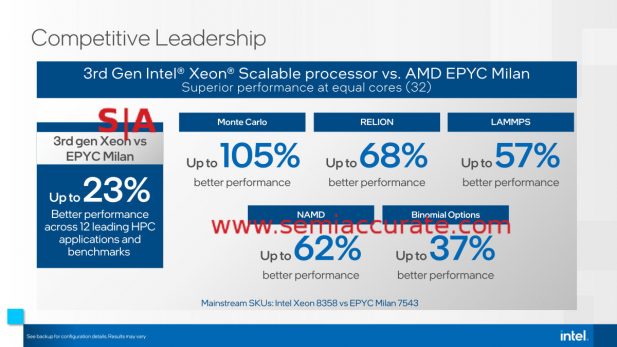 Not the comparison we would choose

One final bit is the ISC’21 slide comparing Ice Lake Xeons to AMD’s Milan Epycs above. It looks really good and it is a pretty fair comparison given the constraints, but those constraints are too sketchy for SemiAccurate’s taste. The CPUs compared, the Xeon 8358 and Epyc 7543 are both 32c dies with comparable prices, AMD is a few hundred dollars less, and comparable TDPs, AMD is again about 10% more efficient. Those are MSRPs and Intel is effectively giving away server CPUs at the moment so your mileage may vary a lot if you know how to negotiate.

The biggest issue is that the Xeon is at the high end of the realistically available Intel line, the Epyc is a mid-range model, you can scale the AMD to 64C and the Xeon to 40C. As long as you don’t need volume and have friends who can supply halo/marketing parts on the Intel, there is headroom. That said given that a 64c Epyc 7763 is a little more than twice as expensive as the 7543 and a little less than 2x as fast, we will just use the 2x factor for simplicity. So what’s the problem?

The problem is that if you scale up the AMD parts to 64C you double the performance on most bechmarks, especially the compute heavy ones Intel is using for comparisons. 2x the Xeon cores means 2x the CPUs in order to match the scaling of 64c Epycs in cost and performance. In turn that means 2x the platform costs which doesn’t scale for zero dollars. The rule of thumb is that CPUs are about 1/3 the cost of a server, feel free to use your own models here though, so doubling the Xeon sockets doubles the cost of your servers. Doubling the core count of a Epyc doubles the cost of the chip for a 33% adder or so. That breaks the TCO of the Intel solution and is why SemiAccurate has a big issue with the constraints. A similar comparison versus a 64c Epyc at the system level would be a tad more painful for Intel. (Note 2: The MSRP of the 40c Ice Lake 8380 is $219 more than the MSRP of the 64c Milan 7763 so scaling up would be very unpleasant for Intel marketing comparisons.)

With that out of the way, lets get back to the Sapphire delay. Intel didn’t give out a ton of specifics with their roadmap update but there is a lot to glean from what they did say. Lets look at the details Intel didn’t put in their public remarks.