Taiwanese company ADATA launched their latest XPG (Xtreme Performance Gear) SX900 line of 2.5-inch SSDs on April 17, 2012. With a “new optimized firmware”, the company said they can put a total of 512 GB MLC (multi-level cell) NAND flash chips into a single 2.5-inch SSD drive, which is 7% more storage capacity than the common offerings on the market for similar SSDs using SandForce SF-2281 controller.

Performance figures provided by the company boasts a maximum sequential read and write (ATTO) rates of 550 MByte/s and 530 MByte/s respectively, in addition to a maximum random write speed of 85,000 IOPS for 4k blocks. On the AS-SSD multimedia data transfer benchmark, official figures shows up to 510 MByte/s for read and up to 465 MByte/s for write.

The rest of the bullet points are similar among recently released SSDs with SF-2281 controller: SATA 6 Gbit/s interface, TRIM command (Windows only) and RAID support. So no surprise there. 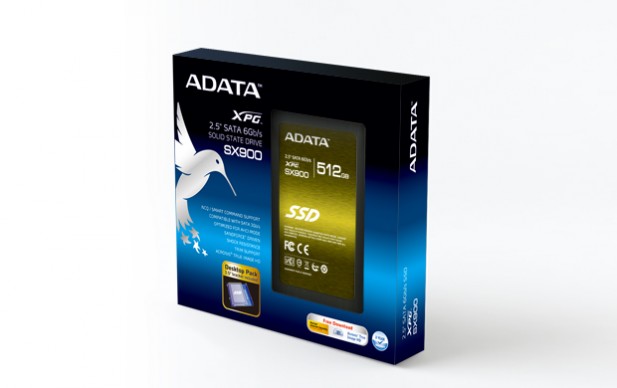 Besides the SSD drive, the retail package includes a 2.5-inch to 3.5-inch bracket for installation into a 3.5-inch bay, Acronis True Image HD and disk migration utility software (Windows only). The software can be downloaded from the company website and the activation code can be obtained online using the 16-character code that comes with the SSD.

For those who are interested in giving your notebook PC some more low-power storage space, you can find ADATA XPG SX900 SSDs on Amazon.com and Newegg.com. For those who live in Canada, NCIX and Canada Computers will be the right place to find them too. But if you don’t use Windows, then you might want to think about it twice as you won’t get the free software plus utilities and/or a TRIM command (for several filesystems). S|A