One of the more interesting software initiatives to come out of last week’s AFDS is AMD’s Media SDK. What this SDK aims to do is enable the use of AMD’s fixed function hardware blocks and GPU acceleration abilities by exposing them through APIs and code samples. In the larger context of the competitive market place, AMD needs developers to take advantage of the GPU based capabilities in its APUs in order for APUs to offer tangible benefits for general compute work loads. To this end AMD is preparing example applications, creating APIs for developers to use in their applications, and documenting everything with guides and tutorials, as part of their effort to create this Media SDK.

In a lot of ways AMD’s Media SDK is a sign of progress on the part of AMD’s developer relations group. If they can’t convince developers write their own code for UVD/VCE acceleration behind closed doors, then the next best option is to make the developers that don’t offer this kind of acceleration look rather silly by releasing pre-baked code and APIs that anyone can use in their own application. Additionally, AMD is doing a lot of the leg work for developers that are interested in using these capabilities, but don’t have the resources to work with AMD directly. AMD is, in a very practical sense, laying the ground work for wide spread usage of its fixed, and special, function hardware with this SDK.

Looking at this slide on the types of applications that AMD is hoping to accelerate with its Media SDK, we can see that all of these tasks are related to visual information or experiences. AMD’s counter to Intel’s WiDi is going to be a part of this Media SDK, as well as APIs for doing post processing and transcoding HD media through AMD’s UVD and VCE hardware blocks. It’s going to be very interesting to see how AMD attempts to enable augmented reality and visual recognition applications through this SDK, as those are applications that stand to benefit greatly from acceleration, but have yet to receive much attention from fixed function processing solutions. 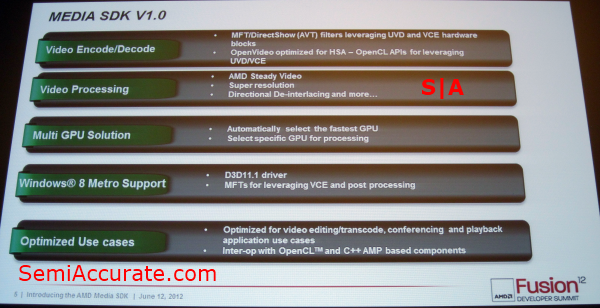 Moving on to more specific list of what AMD is promising with the first iteration of its Media SDK we can see that UVD/VCE acceleration as well as OpenCL based video post-processing abilities will be supported, and enabled, by the SDK. 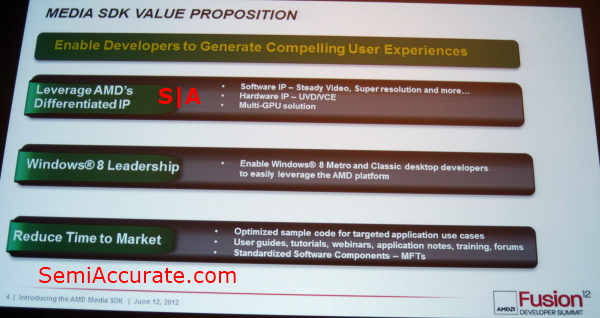 Finally we can see why AMD thinks that its SDK is going to be used by developers. The key points here are that it creates the opportunity for an improved user experience compared to non-accelerated applications, and reduces the time to market component of software development by leveraging AMD’s code. To convince developers to use the code in the Media SDK, AMD is providing all kinds of support; from user guides to tutorials to a series of webinars, all while offering the SDK for free.

Below we have a video of a sample application from the SDK that AMD demoed at AFDS.

The Q & A segment, once again, provided a fair bit of insight into the composition and scheduling of the Media SDK. AMD is going to be releasing a public beta later this year and is expecting to release the finished SDK in 2013. For now the Media SDK is very much a Windows OS targeted offering, but AMD is leaving the door open for targeting other OSes in the future. Licensing was also brought up as a topic of interest by one of the audience members. AMD primarily wants open source developers to take advantage of the SDK and as such it will be a royalty free offering. AMD is apparently in the process of weighing their licensing options to meet those two goals, but have yet to settle on a definitive choice. Another audience member brought up the issue of support for non-AMD platforms. In regard to this point AMD informed us that because the Media SDK uses run times that are called from within the Catalyst driver package, it won’t function on non-AMD platforms.

Needless to say AMD is still in the process of building its Media SDK, so many of the details will probably change between now and when it hits the street next year. But at this point I think it’s fair to say that AMD may be on to something with this initiative. Let’s hope that they’re able to extend the benefits of this Media SDK to other OSes in the future. Whatever the case, it’s clear that AMD is continuing to invest in its software ecosystem and planning to offer greater levels of support for home-brew and open source developers through the creation of well documented APIs. Kudos to AMD for another meaty session at AFDS.S|A