The Magic of AMD’s Lightning Bolt

A little bit of thunder and a whole lot of flash….

Last year Intel introduced the first products based off of its proprietary Thunderbolt interface. Since then Thunderbolt has made its way into the high-end motherboard market and into laptops from a number of major OEMs. Of course these have all been laptops and motherboards based on Intel platforms, and AMD has been essentially unable to respond. But even without any direct competition, Intel has been having quite a bit of trouble convincing consumers to adopt Thunderbolt. One of the biggest barriers to the wide spread adoption of Thunderbolt has been its relative cost compared to USB 3.0 and other standardized technologies. Thus Intel has yet again created an opening for a low cost competitor to spark some life into this otherwise dull market segment, and AMD is working to be that competitor. 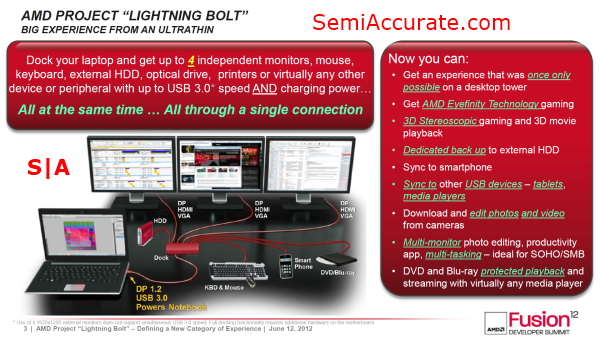 To this end AMD has Lightning Bolt. Now Lightning Bolt doesn’t attack the same high-bandwidth market that Thunderbolt is aimed at, (that’s what external PCI-E is for) but it does attack the more practical side of Thunderbolt by taking the multi-device and electric charging capabilities that Thunderbolt offers and expanding upon them. Lightning Bolt allows for a single DisplayPort 1.2 connector, using a special Lightning Bolt capable cable, to connect to a dock. The dock is able to power up to three additional display outputs, as many USB ports as you want, a gigabit Ethernet port, audio ports, and will even charge your laptop. This is all thanks to the clever use of standardized I/O technologies that AMD calls project Lightning Bolt. 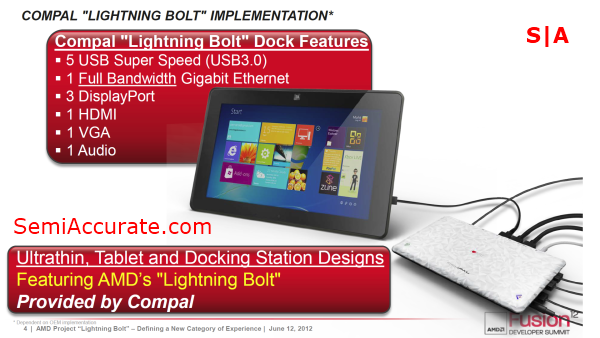 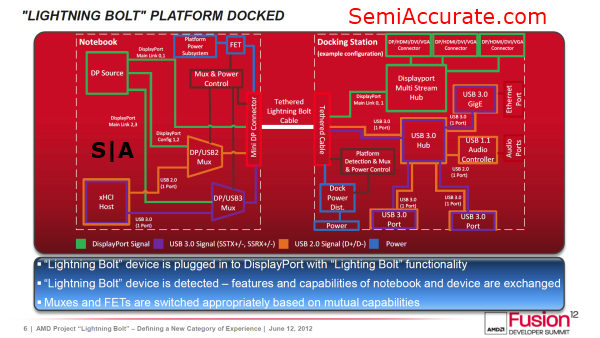 At the hardware level Lightning Bolt is a surprising simple, and driver-less, hardware capability that allows the USB 3.0 channels from the chipset and the DisplayPort channels from the APU to be routed over a cable and out to a hub. 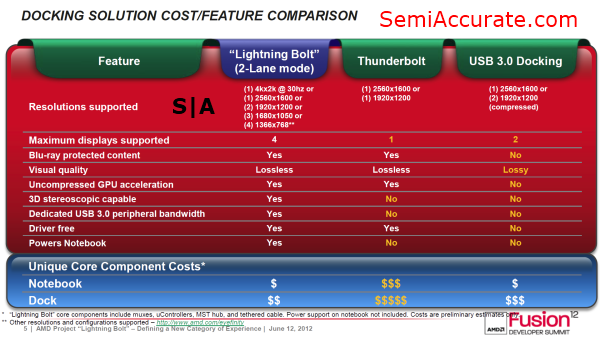 AMD was nice enough to put together the direct comparison table shown above. The key take away here is that Lightning Bolt offers a wider array of capabilities than its competitors for equal or less cost.

AMD’s Lightning Bolt is a tantalizing proposition, but I can’t help but wonder if it will fare any better than Thunderbolt did when it comes to OEM adoption. 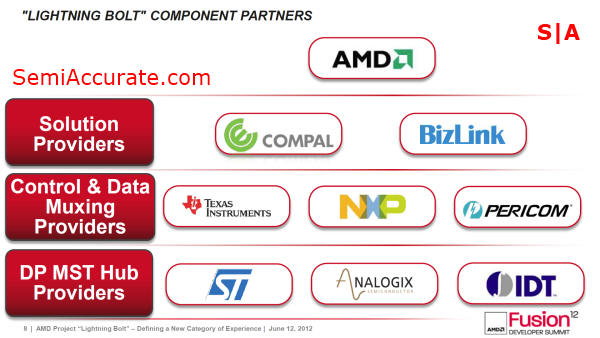 Based on the long list of partners that AMD is working with, there is little doubt that we will be seeing project Lightning Bolt on at least a few flagship laptops and tablets.

As far as timing goes, AMD is hoping to have products on the market by the beginning on next year. I for one can’t wait to see an “ultra-thin” powering an Eyefinity demo of Dirt 3, while charging a phone, backing up data to an external hard drive, and doing so all while powering a cylon over USB 3.0. Ah, the wonders of AMD’s Lightning Bolt.S|A