Cool me down, and blow me away…

Today we have the pleasure of reviewing Gigabyte’s new Luxo M10 case.  The M10 is an entry-level gaming enclosure priced at $79 that offers a geometric red and black exterior. As such, it has some draw backs in terms of build quality and features that we’ll address later in this review. But the M10 does excel in one key area, cooling performance.

Outside of its exterior design and cooling ability the M10 has a number of other highly sought after features such as cable routing space behind the motherboard, tool-less latching mounts for hard drives and disk drives, and an SSD bay. 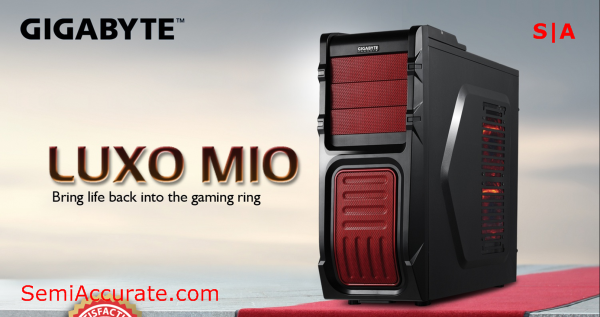 The review sample S|A received was kited out with a total of six 120mm fans. Of those fans three were made of clear acrylic and featured red LEDs, one was solid black, and the last two had black bodies and red blades. Needless to say the inclusion of six fans gives the Luxo 10 a leg up on the competition. 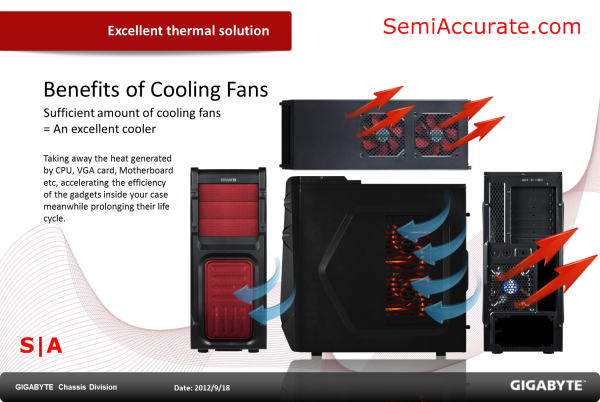 In our testing we found that the Luxo 10 actually offered superior cooling performance to my personal favorite case, the Antec LANboy Air, which costs significantly more than Gigabyte’s offering. One of the most thoughtful features of the Luxo 10 is its extensive use of dust filters on intake fans. 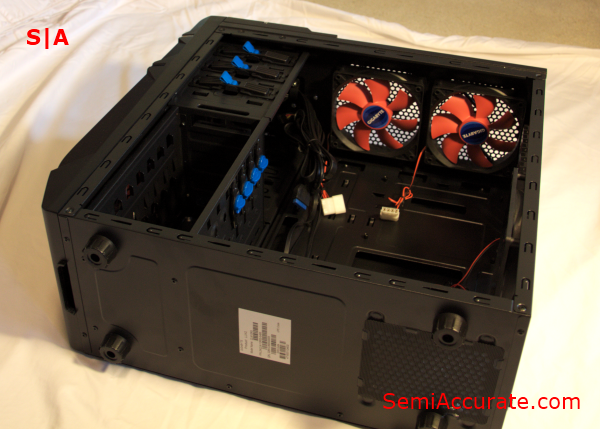 Looking into the case we can see two red non-LED fans that pull hot air out of the case. Additionally, we can see blue latches of the tool-less drive mounts, and a bundle of I/O cables descending from the front I/O panel which is located on the top surface of the case. On the bottom of the case you’ll notice that there is a dust filter for your power supply, should it chose to pull air from under the case.

On the rear of the case we can see a single black 120mm fan, as well as a mess of ventilation holes next the the expansion bays. The expansion bays are covered by sheet metal pieces that are primed to be broken off. The problem here is that the sheet metal in this area is all of the same thickness, which would be okay, expect that the M10 uses very thin sheet metal, so thin in fact that when I had to remove a pair of expansion bay covers I bent a couple of different piece of metal up just by applying the force necessary to break one of the bay covers off. 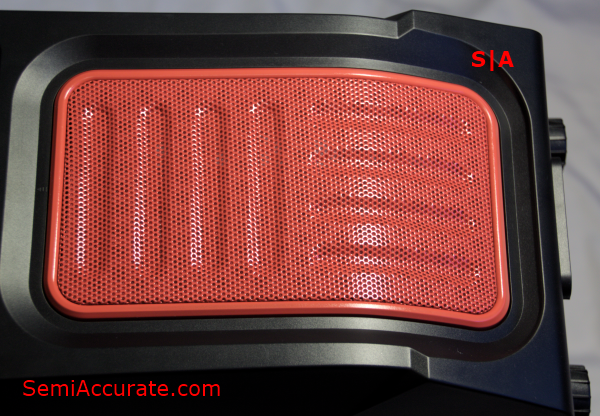 Here we have the lower front panel on the M10. This front panel hides a single 120mm red LED fan and also acts as a mesh dust filter. One of the nicer thing about the M10 is that all of the dust filters are easily removable, and this one is no exception. By merely pressing on the cover it will pop of so you can remove it for cleaning. 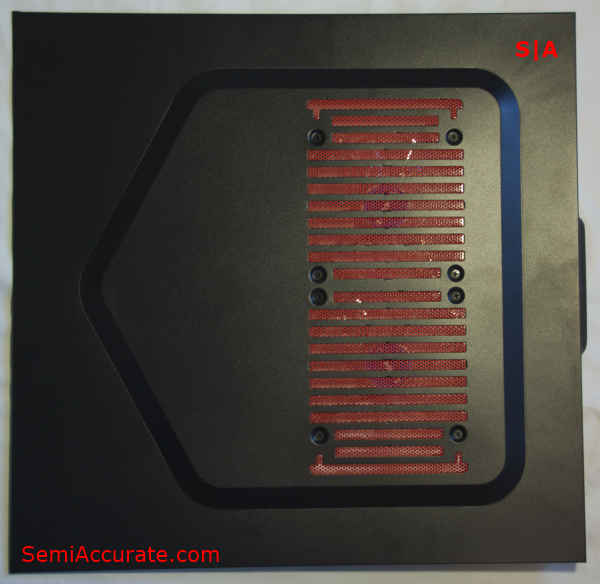 Here we have the case side of the Luxo M10. The M10 is not a windowed case, and I don’t see that as a negative considering that Gigabyte included dual 120mm fans and dust filters on this otherwise pedestrian side panel.

I was also able to mount my H80 water-cooling unit to this side panel without removing both of the fans.

Having used this case for the past two or so weeks I can say that I kind of like this arrangement. It really makes sense for when you’re keeping your computer below your desk, because it’s easier to reach than if they were on the front of the case.

Here we have the Gigabyte chassis logo that is emblazoned on the case. While not as proud as other manufacturers logos, it’s still a competent entry. 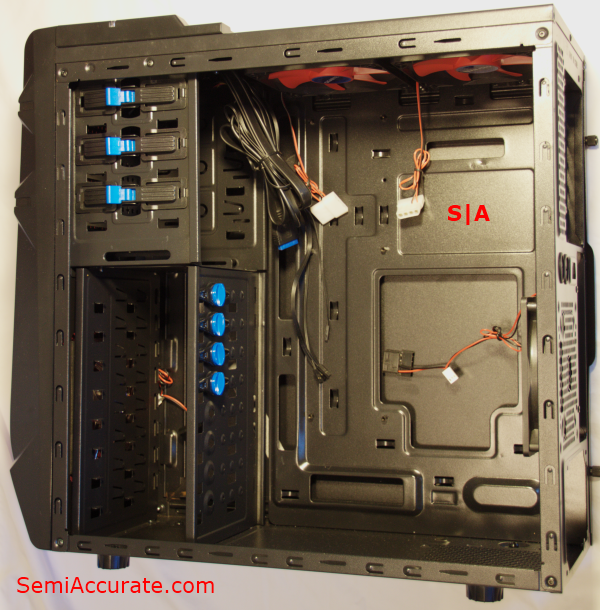 Looking at another side view of the case, I’ve got to say that overall I’ve had a good experience with the Luxo M10. The cooling performance that it offers is excellent, it has a number of, while not innovative, certainly nice features, and it’s at a reasonable price point. It was also able to fit our HD 7970 Ghz Edition review sample with ease.

If there is one clear area where the Luxo M10 puts other cases to shame, it’s cooling performance. While running Furmark and Prime95’s stress test for 4 hours, the temperatures inside of the case remained well below the operating limits of the parts that were under stress. Even the HD 7970, which is known for having a noisy fan under full load, remained almost whisper quiet due to the air flow within the case.

The biggest draw back of the Luxo M10 is how flexible the sheet metal feels. I wish that Gigabyte could have done more to give the case a solid feel when you’re installing parts into it.

The Luxo M10 is not a case that I would regret buying. It has all of the features that you’ve come to expect of case in its price range, while offering cooling performance that allows it to standout from the rest of the crowd, but it is still a budget case. If cooling performance is an important feature to you, then the Luxo M10 should be near the top of your list.S|A