VESA hopes DisplayPort 1.2 MST hubs to be available by 2013

From excitement to irrelevant: To 2013 and beyond?

Words reached SemiAccurate from VESA, the organization that maintains the DisplayPort and other display-related standards, saying the organization hopes to see DisplayPort 1.2 hubs for multi-stream transport (MST) to be available in the year 2013. The hub itself being vaporware is not actually news, but it’s the first time we get a proper and official message about this hub from the standard organization.

VESA: DYK @AMD’s Radeon supports up to 6 DisplayPort displays by daisychaining them to 2 mini-DisplayPort outputs?

SemiAccurate: So when will the MST (multi-stream transport) hub for this to be available on market? Would that be any time soon?

VESA: Thank you for your question. We hope to see the MST hub in 2013.

Remember the DisplayPort 1.2 standard supports MST, allowing daisy-chaining of a maximum of six full HD (1080p60) monitors from two DisplayPort outputs on Radeon HD 6900 series and beyond? It would be useful to not only gamers with a display card that comes with only one or two DisplayPort outputs, but that also benefits the notebook and even the thin client crowd for business and enterprise applications such as a digital signage or multimedia presentations. However, there is a caveat, the DisplayPort 1.2 MST hub is still nowhere near the ‘available for sale in the market’ status at time of writing.

To quote page 8 of the whitepaper:

As an example of how to combine MST and AMD Eyefinity technology, consider figure 5. Using an MST hub, which is expected to be available in 2011, even the AMD Radeon™ HD 6870 and AMD Radeon™ HD 6970 reference boards can drive up to six displays using only two DisplayPort connectors. This provides an upgrade path for end-users who have three monitors today, but may want to upgrade to five or six monitors in the future.

There weren’t any product launches or any updates throughout the year 2011, giving it an official ‘vaporware’ status. The expectation of the availability of MST hubs for DisplayPort 1.2 sparked again when AMD launched their Radeon HD 7900 series in January 2012, suggesting a Summer 2012 timeframe for availability. 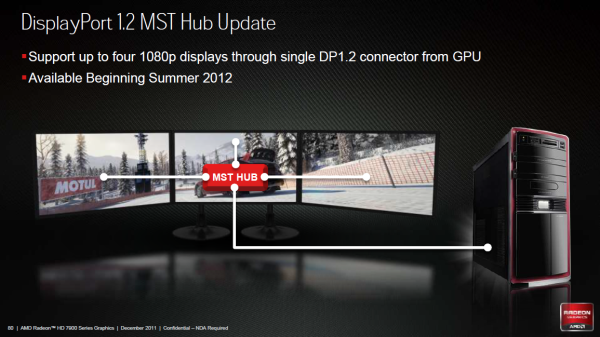 In April 2012, AMD technical marketing posted a blog post detailing the MST hub update and pointing out that the prototype MST type being shown at CES was as bulky as a 4-slice toaster and required an external power source. AMD hopes the final product would be as small as a 3-port USB hub as illustrated by a mockup design. And a later GCN architecture whitepaper (Page 18, footnote #5) points out 4k (4096×2160 or 4096×2304 at 60 Hz) displays would require DisplayPort 1.2 HBR2 and the display would be driven by the GPU as two side-by-side monitors (2048×2160 or 2048×2304 at 60 Hz) using the DisplayPort 1.2 MST protocol over one DisplayPort cable, so that makes it world’s first commercial application of DisplayPort 1.2 MST solution. *Deadpan* Hurray! *End deadpan*

As Summer 2012, being a thing in the past, nothing was announced, which is not surprising at all. As a probably unrelated side note, Intel still doesn’t have a single product supporting the DisplayPort 1.2 standard, much less the HBR2 standard to properly support 4k displays. And shh… don’t ever mention about the infamous Thunderbolt-without-light, which currently, has no support for DisplayPort 1.2 either.

On AMD’s side, the professional graphics have six mini DisplayPorts as a feature to video wall products and the ultra high-end professional graphics products before MST eventually comes to market. Meanwhile, they also introduced their own “Lightning Bolt” notebook docking solution, incorporating the same MST Hub for multi-monitor support, along with several more integrated features for ultra-thin notebooks. The actual date-of-arrival? Beginning of next year, what a coincidence.

Will the availability timeframe for DisplayPort 1.2 MST hubs slip for yet another time? Or will the hubs not be delivered ultimately? Will the DisplayPort ecosystem finally be ready in 2013? That depends on a lot of factors and only time will tell. So yeah, even VESA ‘hopes’ to see the hubs in 2013. That’s a shame for the whole DisplayPort ecosystem, seriously. S|A

Editor’s note:  AMD had not responded to a request for comment by time of publication.