Back at this year’s Fusion Developer Summit (AFDS), AMD released the first details about a forthcoming software development tool called CodeXL. Since then, we’ve been keeping tabs on this tool as it’s matured. On December 4th, AMD released CodeXL to the general public after a public beta period.

Just to recap for those that may not remember this app, CodeXL is a Swiss army-knife like software development tool designed to enable a wider range of developers to take advantage of the GPU acceleration capabilities of AMD’s APUs. By releasing this tool AMD is giving developers access to both CPU and GPU performance profiling capabilities, as well as the ability to debug both OpenCL and OpenGL code as it executes on the GPU. Additionally, CodeXL has the ability to do static kernel analysis, which allows developers to estimate kernel performance without actually running the application.

As part of AMD’s efforts to reach a wide audience, CodeXL is a multiplatform tool. This means that it can run on various Windows operating systems and even on Linux. There are currently three versions of CodeXL; a standalone version for Windows, a standalone version for Linux, and a version of the tool that has been formatted into a plugin for Microsoft’s Visual Studio. It’s worth noting that at this point AMD does not have support for Windows 8 x64 and Visual Studio 2012 listed in the release notes.

AMD has not made any major changes to CodeXL’s feature set since it was introduced back at AFDS 12. This change log in this version’s release notes focus mainly on stability and platform support improvements, rather than new features. Although quickly browsing through AMD’s developer forums revealed that the CodeXL development team is planning on making a number of changes including support for new Visual Studio editions, and the Windows 8 x64 operating system. 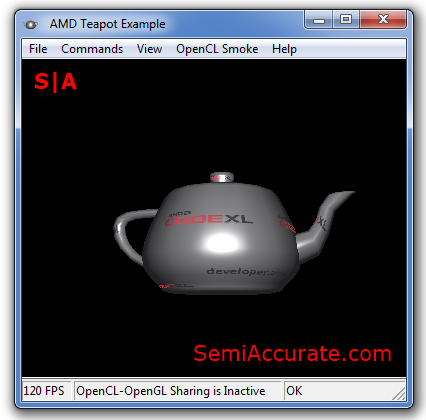 The aim of this program is to make coding applications that take advantage of AMD’s heterogeneous chips as easy as possible. With a refresh of the Trinity APU in the works for early next year, and AMD is planning on releasing a whole slew of new tools and programs, including the Media SDK, that are designed to enable developers to take advantage of the capabilities of its APUs. It will be interesting to see how much traction AMD is able to gain with software developers thanks to these new initiatives.

For now we’ll have to take comfort in the knowledge that AMD has made it a lot easier to code for its APUs with the launch of CodeXL.S|A