The riddle of the AMD’s E6760 ‘mystery card’ is finally solved thanks to the good folk at AMD (NASDAQ:AMD). It turns out to be a reference board for embedded parts, and is not something meant for public consumption.

Most if not all of the questions were answered in a presentation about the E6760, an embedded GPU meant for things like casino machines, kiosks, and digital signage devices. The first odd thing is that it comes as a 37.5mm x 37.5mm module that includes the GPU and 1G of 800MHz/3.2GHz GDDR5 on a 128-bit bus. For the GPU itself, it has 480 ‘Evergreen’ shaders at 600MHz, and it pulls 35W TDP. The whole thing looks like this. 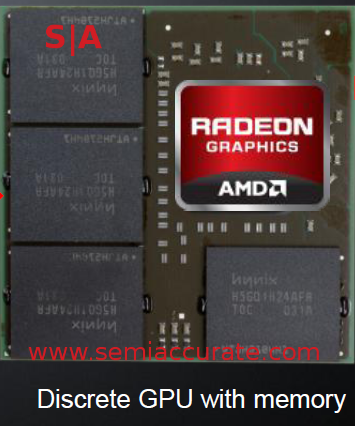 Those specs explain the heatsink size, both in area and rough dissipation. It also explains why there is no memory on the board. Extra connectors are probably there so they only have to make one board, and all are probably not usable at once. Some other data sheets on the AMD site seem to suggest only two are usable at once, but that might be for a similar but not exactly the same part. 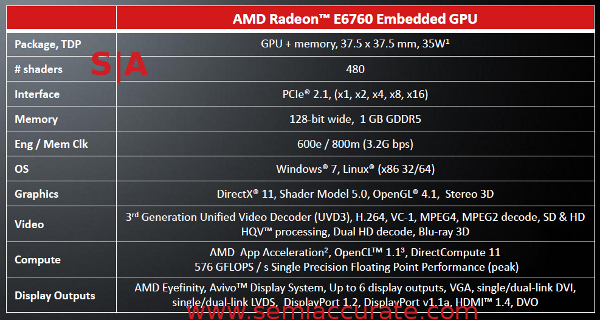 Spec sheet for the E6760 module

So in the end, what we have is a pretty normal part for the embedded world, but one that looks mighty odd for the rest of us. It is not like anything we have seen before, and is not a standard mobile form factor. The board is more or less a glorified breakout board for the module so you can plug it in to a PC and evaluate it without making a system board from scratch. Mystery solved.S|A