Gigabyte puts out a sub-1Kg notebook called the X11

Gigabyte has introduced the world’s lightest Ultrabook, the carbon fiber chassis X11. While it is still an Ultrabook, and therefore compromised by Intel design regulations, it still looks to be the best of breed. 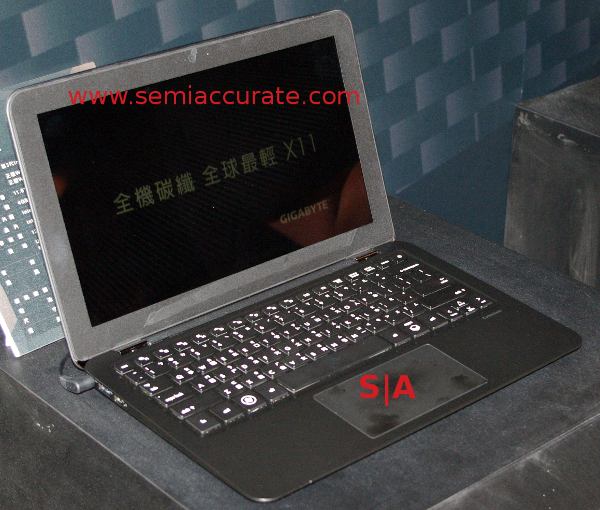 The X11 in bad lighting

Let’s start this out by saying that SemiAccurate isn’t a fan of the whole Ultrabook/Ultrathin concept, it compromises too much to meet rather arbitrary specifications. Form follows function is a good thing for a product you need to use, but Ultrabooks are and extreme of function hobbled for form. But you lose ports, battery life, cooling capacity, and too many other things to meet Intel’s stupid wish list. If you don’t, you don’t get the marketing funds, and the whole exercise becomes pointless.

That said, lets get back to the good stuff, Gigabyte’s new X11 notebook. The X11 is most likely the worlds thinnest and lightest notebook, but as soon as this gets posted, someone will prove us wrong. How thin? between 3 and 16.5mm, far less than the last round of Sandy Bridge Ultrabooks. The weight? A mere 975 grams, but as you can see below, the real world models beat that claim, but not by much. Still…… 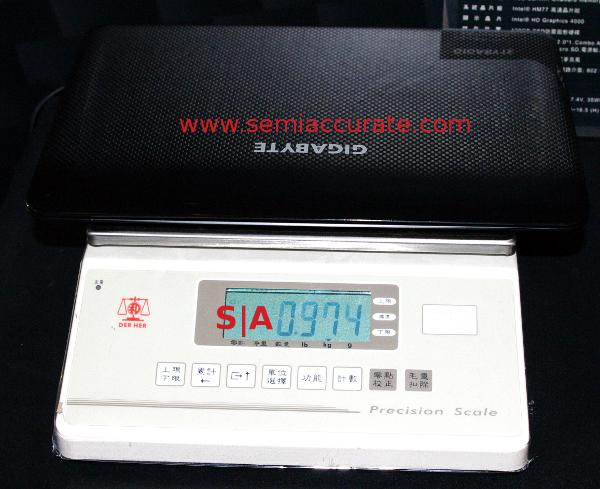 The rest of the notebook is pretty standard dimensions for an 11.6″ screen chassis 297mm x 192mm, and the screen is 1366 * 768, fairly pedestrian for such a premium notebook. Moving around the chassis, there is a USB2 and a USB3 port, a combined audio port, a miniDP port, a microSD card reader, and that’s it.

This is all powered by an Intel Core iSomethingmeaningless5-3427U CPU at 1.8GHz, but Intel doesn’t want us to know that yet, the embargo technically goes up next Monday. There is also an i7 variant, but that isn’t announced either, and since there were none on hand, we couldn’t pull model numbers off when Gigabyte personnel weren’t around. This is backed by 4GB of DDR3-1333 and a 128GB Adata SSD.

The lowest end model will run $999, but there are larger SSD models and the i7 version in the pipeline. The first models will come out in July, give or take a bit, with others following soon after. There were hints of a better screen in the pipeline, but that is unlikely to be a near term thing. Gigabyte’s X11 is a sealed case, pretty much mandatory for something this small and thin, so no post-purchase upgrades.

Subjectively, the X11 is really light, you have to pick it up to believe how light it really is. Thanks to the carbon fiber chassis, light does not mean so floppy you immediately question how long until pieces break off, it is really stiff too. This is a very hard engineering feat, so hats off to the Gigabyte crew for this one. We won’t comment on the rest of the machine for two reasons, they are really early prototypes, and we couldn’t play with them freely. Drawing conclusions about subjective bits from early prototypes is unfair, so lets wait until they are finalized before we comment on that part. That said, no immediate flaws noted.

All in all, Gigabyte has the thinnest and lightest Ultrabook out there, but it is still an Ultrabook. That means, by Intel spec, not enough ports, not enough physical space for a battery, and a badly compromised CPU due to lack of cooling capacity. Gigabyte did an amazing job with the X11 though, and it is truly the best of breed. All it needs is a 1600 * 900 screen, a few more mm of height for ports, and a Trinity CPU, that would be a nice notebook.S|A