Auras is a name you probably don’t know even though you have several of their products. If you have any PCs, laptops, or video cards, the chances are high you have one of their coolers, and Computex showed us why.

If you recall how small the CCI Ultrathin cooler shown at AMD’s TFE was, Auras has similar solutions and more. Auras makes heatsinks, fans, heatpipes, vapor chambers, and lots more coolers for just about every manufacturer out there. From video cards to sub-20mm laptops, they do it all, but get no credit on the consumer side. If you look at some of their offerings below, you can see why that is a shame, they do cool stuff, pun, pun.

The spread of cool toys

One very interesting technology that they were showing off in prototype form was an evaporative CPU cooler. The concept is not new, but there are more than enough technical roadblocks to prevent the simple sounding tech from going mainstream. Some have tried, none are widespread, and there is usually a good reason.

The concept is simple, pump a liquid over a heat source and boil it. Since the energy required to boil water (heat of vaporization = 2260 J/g) is many times that of taking it from room temperature to 100C, you can see why boiling is a very attractive and efficient way to move heat off of a chip. The problems of drying out, pressure, and keeping the vapor moving in the right direction have kept it out of consumer level products. 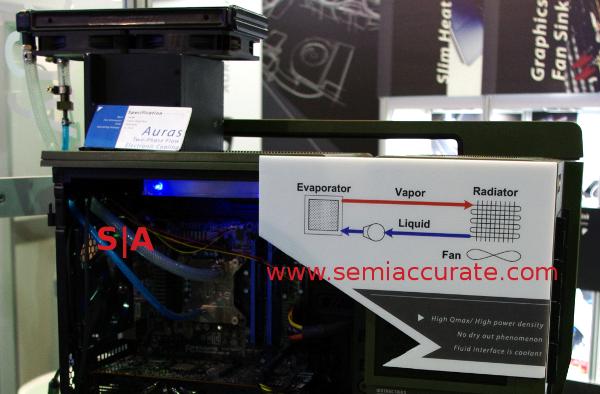 The rig and the diagram

Auras was not deterred, and as you can see, was showing off a two phase cooler at Computex. This prototype was capable of moving 240W from the CPU to a radiator with very high efficiency. It uses micro-skived fins in the CPU heat plate, then pumps cold liquid in the bottom, vapor comes out in the top tube. Under the lid, the water, or whatever coolant they choose, simply boils, and physics does the rest. Any pumps that they use are likely barely turning over, and the big fans can run at low, read quiet and efficient, speeds.

All this said, the unit is still a prototype. Although it wasn’t stated on the signs, a chat with the engineers who designed the system revealed that it is still directional. In non-engineer speak, that means the big hose has to be above the little hose, or the mobo need to be flat with the tubes pointing up, or it won’t work.

To me, this is a dealbreaker, but I can see how it would work well in a controlled environment, say a server rack. Other than that, the dual-phase cooler is a great idea, it should be quiet, energy efficient, and have a lot of cooling capacity in a small area. Other than the radiator, it should be pretty cheap to make, and can possibly be a passive design. Lets hope Auras can work out the final issues and bring it to market, something like this would be a nice option for a gaming rig.S|A