AMD is putting out two new server lines, the Opteron 3300 and 4300 families. There are nine chips in all being released, along with one new data point. 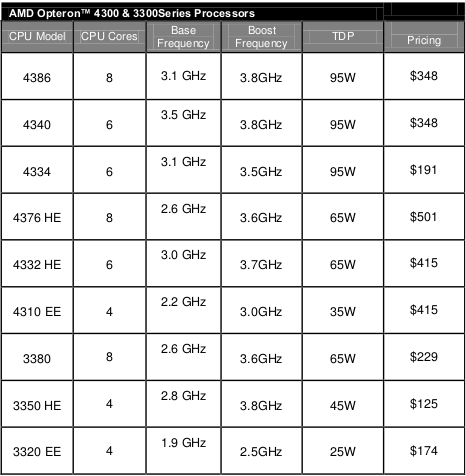 All the specs, and nothing but the specs other than a few lines

What’s the difference between the 3300 and 4300 series? Easy, the 4300 supports two sockets, the 3300 line only one. The 3300 line is also slower and supports only two DIMMs per channel vs three on the 4300. Otherwise the both chips are a single die version of the larger 6300 line. Effectively the chip is half of it’s bigger brother and the 3300 system halved again on the socket side.

So what’s the new data point? Both of these lines support the new 1.25v DDR3 memory spec, and according to AMD, they are the only x86 CPUs to do so. That may not sound like much over a 1.35v DIMM, but on data center scales, it makes a massive difference. If Romley needs anything more than a BIOS update to match this feature, it will be a major AMD advantage in the data center market.

Since the 3300 and 4300 lines are effectively Opteron-ized versions of Vishera, these chips should support the same thing, but we haven’t seen anyone try it. Overall, it looks like AMD has a product that is priced to sell, IE they know the calculations that the data center buyers make, and are pricing their product to hit that TCO point. If they got the numbers right, these chips may not excite you, but they should sell decently.S|A