Lian-Li does something new and innovative in PC cases

CES 2013: Solid and cool, at least as far as airflow is concerned

Lian-Li had a lot of very nice cases at CES, but one really stood out for being, well, innovative. When was the last time you heard case and innovative in the same sentence?

The first one is really a trio, the PC-Q27, PC-Q28, and PC-A02, two mini-ITX cases and a mid tower. They have a really nifty set of C-shaped mobo mounting rails that double as cable routing paths under the board. On top of this, the side panels slide off very easily, and better yet, go back on easily too, not something most cases can claim. Aside from the mobos that they take, the Q28 is just a A27 with two drive cages added to it, bigger but more useful. As you would expect from Lian-Li, they are laid out well, no obvious sharp edges, and of course built very solid. 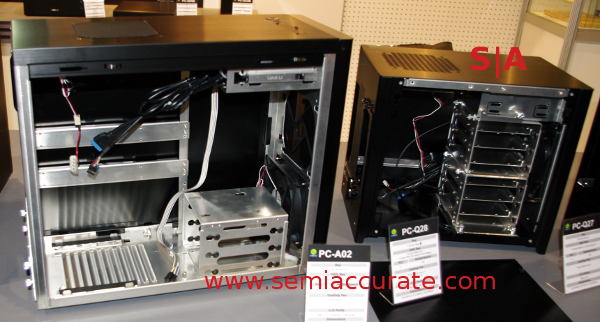 These first three are nice but hardly innovative, that is where the next one, the PC-V850 comes in. It does something that I have never heard of, much less seen before. Notice the two hinged panels with fans on them, one for the drive cage, the other for the mobo. They suck air in from the back of the case, not the front, for theoretically much quieter operation. You can see the intake shroud on the far left. 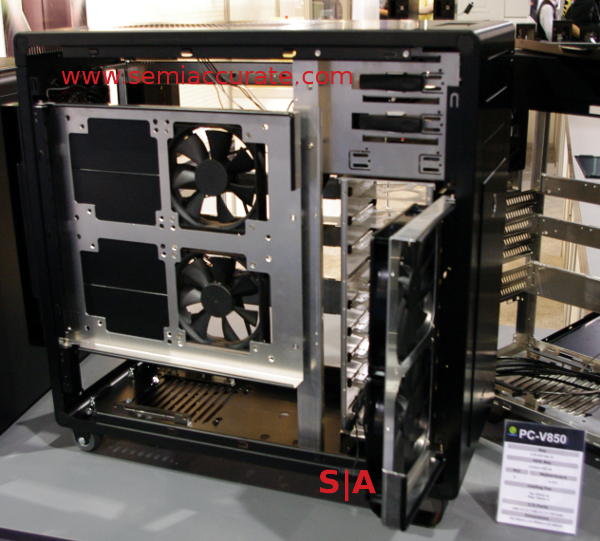 These panels form a path with the side cover to route the air across the chassis and blow them directly on the hot bits. It is a great idea, and should be an improvement over the normal holes in the front or side of the case. Since they are hinged, you can swing them out of the way for easy access, and the side panel is just as easy to remove as the Q-series above. All of the drive bays have tool-free mechanism, the case itself has rear wheels, and, well, it is built like a tank. It may not look shiny and exotic, but the PC-V850 is engineered in the right way for all the right reasons.

Last up we have the PC-N1 case, and it is a bit of a curiosity. Remember the mac mini, err, we mean the Intel NUC concept? SemiAccurate hasn’t said anything good about it because we can’t really find anything worthwhile about the idea, but now there is one. Lian-Li has a case designed for this diminutive form factor. The prototype we saw is solid, tasteful, and even comes with a back of monitor mount like Intel wants from this class of PCs. The one prototype shown at CES should be enough to house the entirety of consumer demand, but at least it will have a useful and intelligent exterior.S|A