Ultrabooks may be dumb but the money behind them is driving the component market, and Western Digitial is right there on the leading edge with ever thinner drives. At CES they had thinner HDDs, hybrid HDDs, and even a new interface.

The first thing that SemiAccurate noticed at the Western Digital suite was the display of ever thinning 500GB HDDs. As the demo stated, the company has driven that capacity into a 47% thinner overall form factor compared to models five years ago. In 2008, you needed 9.5mm of height to house a 2.5″ drive in that capacity, falling to 7mm in 2012, and now 5mm this year. While we are not one to criticize progress, arbitrary form factors for their own sake are still counter-productive. 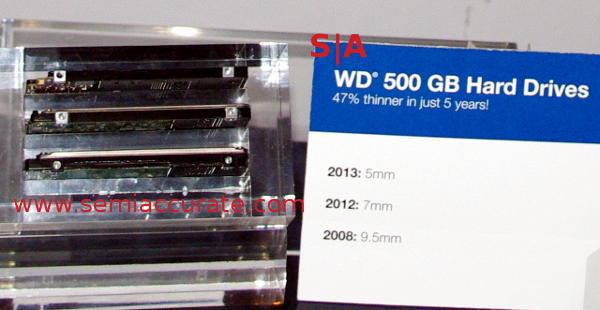 If you take one of those 5mm 500GB HDDs and put a 32GB SSD on the PCB, you get the new WD Black SSHD line. These hybrid devices are just what they sound like, the speed of an mSATA SSD with the capacity of a 500GB HDD in one handy box. There were several variants on the theme, some with 24GB of NAND, others 32GB, and likely many more when they finally hit the market in the near future. 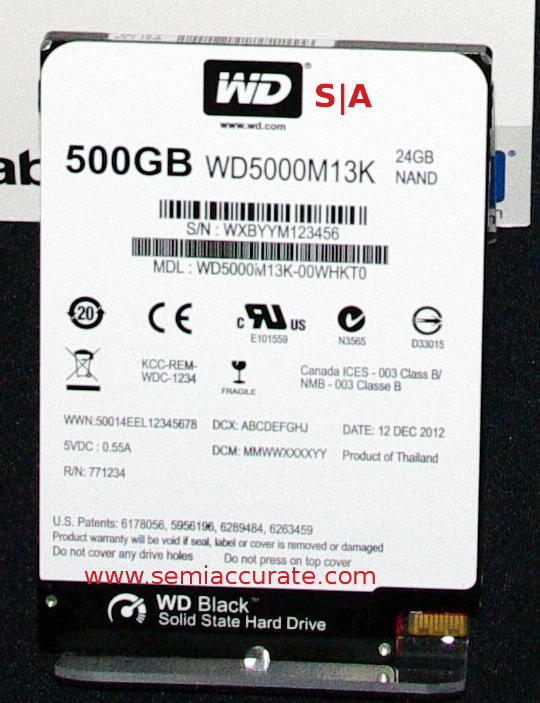 The WD Black SSHD is the new, umm, Black

This all sounds good on paper until you realize that the whole boot/cache tiny SSD is a hack to get around the broken nature of Windows and its inability to work with storage properly. Intel uses it to similarly get around Windows’ glacial suspend and hibernate times. Unfortunately this requires drivers, is OS specific, and more often than not is worse than just using them as two separate drives. We asked WD representatives about how the Black SSHD works, and they would not mention specifics. When pressed, one demo person said that, “It needs specific drivers”. Sigh, next. 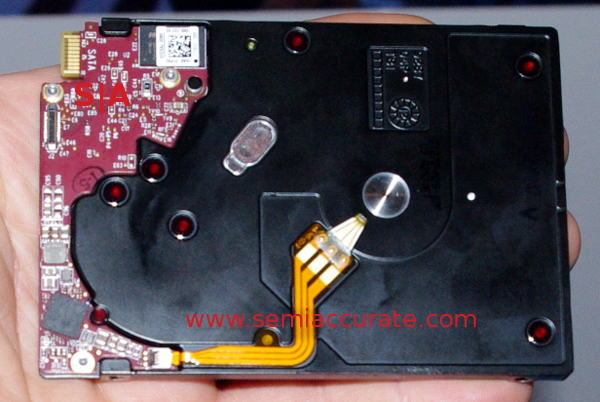 The back of the bus is where the fun is

One interesting bit that was specifically not talked about by WD or even mentioned on their literature is the connector. Take a look, there is only one connector on the back of this drive, and it is clearly labeled SATA. SATA has a 7-pin data and 15-pin power connector, both single sided. This drive has a 20-pin double sided connector. It isn’t NGFF either, nor is it anything we are familiar with. Anyone know what this connector is?S|A