Cherry makes a radical advance with their new keyboard

CES 2015: No joke, it is a really impressive technical advance

In a move that everyone expected, Cherry is finally going to make their own keyboard. The company showed SemiAccurate the new device at CES with another unusual box but the cool stuff is under the hood… under the keys.

The idea is simple, take the maker of the best key switch mechanisms, that would be Cherry with their MX line, and make a keyboard out of it. Most of the keyboards out there worth talking about already use Cherry switches of one color or other, so what is there to add? If the combined talent of almost every other gaming keyboard company on the planet didn’t think of it already, what’s left? Think actual tech rather than shiny materials, rounded corners, or LED blink patterns.

The prototype of the keyboard in question

That tech is what Cherry calls RK or Realkey Technology and it is an actual innovation. If you are up on low-level keyboard minutia you will be familiar with latency and ghosting problems both caused by how the keyboard controller reads the keys. If they do it wrong ghosting is possible and latency for the best out there is around 20ms. Worst of all the total simultaneous key presses that can register is usually capped at a reachable number.

Cherry’s keyboard avoids all of these problems by not doing things in the traditional way. If you look really closely at the picture above, you can’t actually see how they do it because it is on the controller and wiring itself. Instead of a digital scan of the keys, Cherry has reverted to analog signalling. Each key has its own signature and those are all reported back to the controller as they happen and individually parsed and tallied.

Because of this there is no wait for a scan, when you press a key it sends a signal at that exact time. Whatever controller Cherry uses is capable of decoding literally every key on the keyboard being pressed simultaneously. While we didn’t test this at CES, we will take their word for it, the tech they are using is quite capable of this feat.

In the end you get a keyboard that has a latency of 1ms instead of 20 and that latency is determined by the USB polling frequency, not the keyboard itself. If USB gets faster, so can this keyboard. Then again 1ms should be enough for most gamers, it is 20x or so better than the next best. The simultaneous keypress issue is also avoided through clever software, most keyboard controllers report presses back as a bytes that are interpreted by the driver. In this case Cherry is reporting via a bitfield that sends the values for every key back every polling cycle. It should be noted that if there is no key pressed, the controller is smart enough not to report so there aren’t any interrupts generated for no reason.

The Cherry keyboard is not out yet but it should be fairly soon, expect prices to be around $219 in the US and roughly 190 Euros in Euroland. While it may be expensive you know it has good components and the hidden bits could really be revolutionary. We hope to get our hands on final hardware soon so we can say for sure.

One other thing we weren’t expecting from Cherry is the Fast Charger Sync Station, a USB, err, fast charging station that syncs things. I guess the name is descriptive enough but this box could be useful for a lot of people even though it looks pretty plain, see? 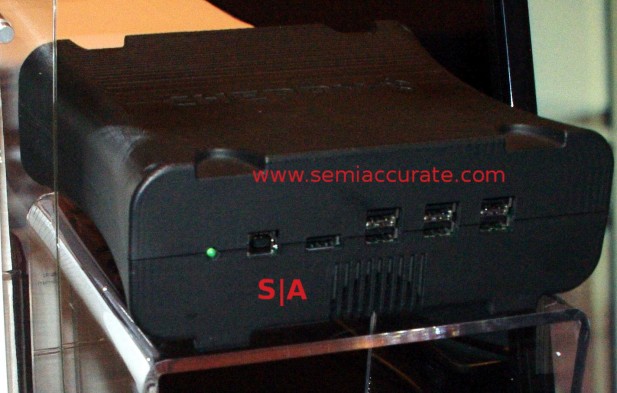 It looks like a box with eight USB ports

The FCSS is a simple device that takes a master USB device and copies whatever you plug-in to the USB-B port on the left to the six ports on the right. It is a two-way copy but it is not any to any, just master to all slaves and the slaves back to the master individually. You an also chain up to five FCSSs together to sync up to 30 devices. It will also charge them with up to 2.29A each port, you can probably get to 2.3A if you shake it hard while it syncs. Look for them to cost around $200 and not come with mechanical switches with many different colors and feels, just a green LED.S|A