Computex 2015: Pretty designs with a lot of thought behind them

It’s not often that SemiAccurate writes about cable makers, but Bestfon deserves at least a nod. Their booth at Computex showed that even a very commoditized space can have some very interesting bits of innovation.

What Bestfon makes is quite simple to describe, cables. That means USB, Ethernet, and related low voltage data cables, hardly the stuff of high-tech dreams. Every trade show booth that sells such cables will always tell you that they are unique, have amazing designs, and so on, but most are just awful. Some are so cheap that they make you cringe when you pick them up, and the sense of design they tout is similarly questionable. At best.

Luckily Bestfon is none of those, they have some actually interesting products that show they thought things through far more than most. When SemiAccurate ran into them during the closing hours of Computex, the industrial designs initially caught our eye. After talking to the representatives in the booth it became clear that the first one they showed, the Multi-Kit Cable wasn’t a fluke, there were several others that showed equal levels of innovation. Take a look at what caught our eye, actually three of things that did. 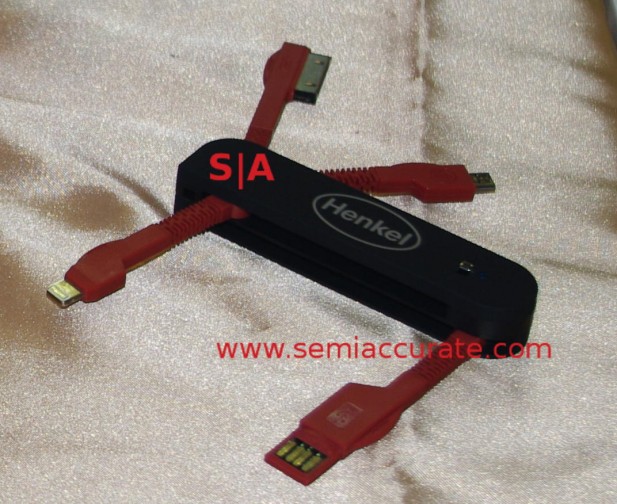 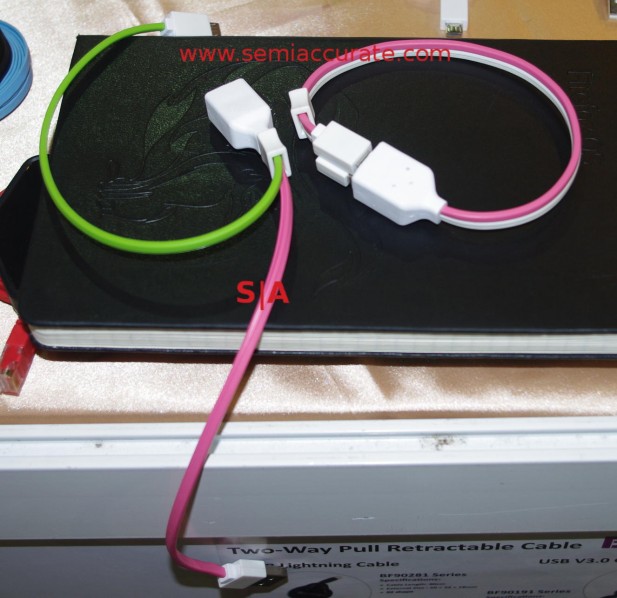 ZipRing Cable comes in much more than USB 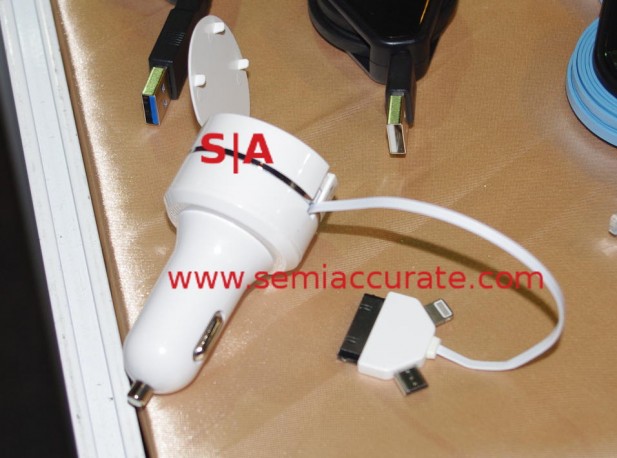 Car Charger Retractable is not a sexy name

The jackknife design is what we noticed first, it is a compact, foldable USB to iPhone4/5/microUSB charger. There are switches for each ‘blade’ and it all works rather nicely, especially considering it should retail for quite a bit less than $20. No cables to tangle in your bag, no retraction mechanism to internally bind, and a form factor that everyone who sees it thinks is cool. You want one, admit it.

Below that is the ZipRing cable, a ziplock mechanism for USB cables. The slick bit is not just the binding mechanism, but the fact that the end works as a cap to turn it into the ring part of ZipRing. No binding there either and it comes in lots of cable types, colors and all that. It will more than a vanilla USB cable but it is a lot nicer product too.

The last picture is called the Car Charger Retractable and it is just that. Before you dismiss it as one of many, check out the three-way head, again an iPhone4/5/microUSB triangular unit. It of course tucks away into the head of the charger for storage, but the design of the cable ends shows Bestfon put quite a bit of thought into this design. This one should also retail for less than $20.

There were several other designs that while cute enough to notice were not groundbreaking. One was a Zippo lighter sized case whose top flips open like the aforementioned device to reveal a USB to Lightning cable. Lighter to Lightning, get it? Ok it is hardly the stuff of hearty laughs but it shows they have a sense of humor. There is also a little car toy that flips open into a car lighter to USB charging cable, and more designs like that.

In the end Bestfon makes cables for charging, audio, data transfer, and all of that just like hundreds or thousands of others out there. Out of the dozens of competitors at Computex, they happened to stand out. Why? Design, and not just pretty shiny design, useful additions to a pretty boring market. That is worth mentioning so we did.S|A