Aqstic, aptX, USB-C, wired or wireless, it isn’t all the same anymore

One thing that get overlooked in most modern SoC like the Snapdragon 845 is sound. SemiAccurate thought sound was a dead topic but new advances in use case bring it back to the forefront.

On the audio front of the 845 we come to two Qualcomm technologies, Aqstic and aptX, both relevant to things like AI and other impending use cases. Most think audio is a solved problem but once you put AI into the mix, things get a bit unsolved. What do we mean? How do you pick out a voice saying the keyword for your product in a noisy room with a movie playing in the background? Things like that are what unsolves the solved.

Aqstic is the high-def audio codec for Qualcomm and it has it’s own dedicated audio DSP to back it up. This is a separate DSP from the Hexagon 685 we covered earlier and also separate from the one in the sensor island, but it is still called Hexagon. It is used for noise cancellation, beamforming, and even has a mode for USB3.0 tunneling. On top of that is six mic support for the 845 itself, all of which are needed for modern voice-based tasks. 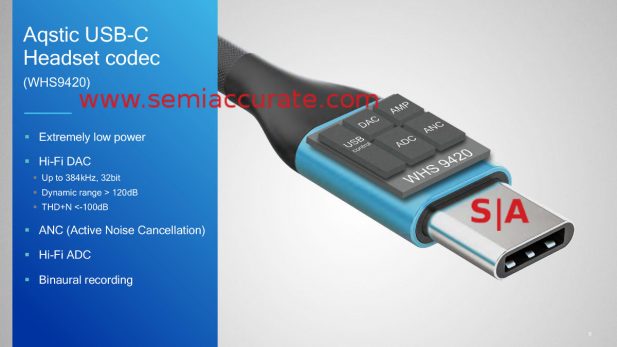 The Aqstic USB-C Headset codec, part name WHS9420, can do 32b 384kHz stereo recording and playback with a dynamic range of >120dB and a THD + N <100dB. If you know audio you are probably impressed, if not lets just say it is really good. The prototype USB-C headset shown below are not just good speakers but also do active noise cancellation and binaural recording. Why? Think voice UIs. 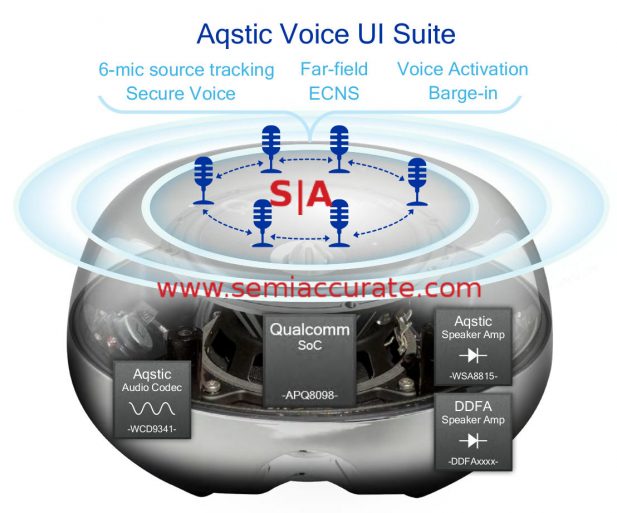 NSA loves this king of device for some reason

Moving higher up the scale we have the Aqstic Hi-Fi DAC which does things like native DSD format playback and has better dynamic ranges than the WHS9420. This is the part in many of the highly rated audio devices on the market now. It is a really high end DAC again with it’s own dedicated audio DSP.

This is all fine and dandy but to do it right you need a way to support *HUZZZK*PTUIII* wireless audio for devices *HACK*SPEW* without headphone jacks. That is where the aptX codec comes in. This is a codec for high rez, low latency audio which can do 24b and has a higher dynamic range, 129dB, than any ADC/DAC out there. It does digital to the speaker and should lower transmission noise quite a bit. 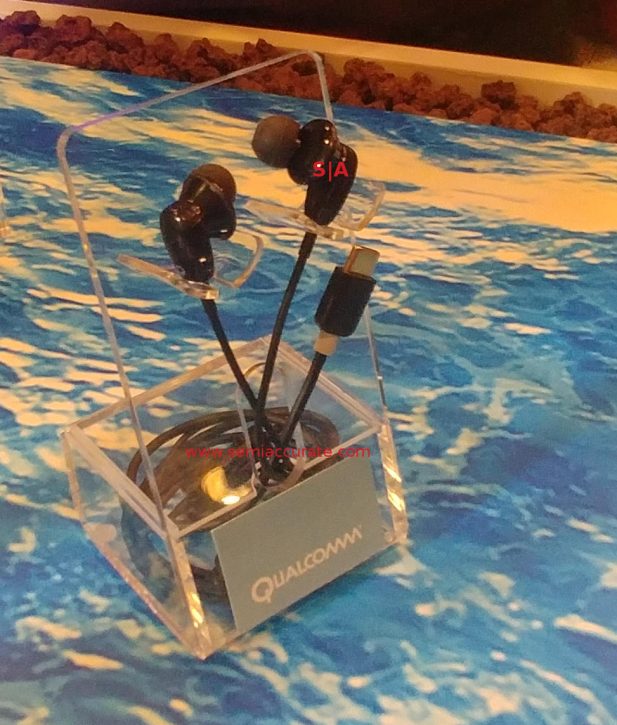 Yes the headphones are real

Between aptX and Aqstic, Qualcomm can provide software and AI with high quality audio inputs. This is critical for error rates, still too high for voice inputs to be mainstream, but any improvement is an improvement. (Note: What we mean by that is a claimed 95% recognition rate means an error every 20 words. The last sentence was 18 words when spoken….) The pairing supports Google, Amazon, and Baidu voice UIs out of the box, and the Qualcomm 6-mic reference speaker above shows it off well. One very important partnership announced last week was Qualcomm and Baidu are working together to optimize the QC hardware for Baidu’s DuerOS voice AI/UI/OS. This is going to be huge in China.

Last up we have something nice for users of wireless headphones, TrueWireless stereo. These are Qualcomm’s proprietary additions to Bluetooth to allow multiple paired devices. Why? Stereo earbuds, wireless stereo earbuds. Remember all the latency headaches Apple had to deal with which delayed the AirPods shipping?

If you can pair multiple devices, Qualcomm says TrueWireless has no real technical limit on device count, those problems go away. You don’t need a gateway like some others do, and you avoid the transmit to one ear (L), retransmit to the other (R) from the first (L) power drain problem. In short the way TrueWireless does things should be the best of both worlds, now lets see how many devices end up supporting it.

So what Qualcomm has in the audio subsystem of the Snapdragon 845, external DACs, and wireless protocols, is a system to do voice UIs right. If implemented from end to end, the device can do pre-processing of voice commands, lessen traffic, noise cancel, beamform with multiple mics, and a lot of other tricks. SemiAccurate isn’t a fan of voice UIs and is scared by always-on mics in the house and work, but the tech underlying it is sound. Yes that was a pun.

Once again Qualcomm doesn’t provide a block that does X, it does an end to end system from the SoC to the speaker, wired or wireless, assuming you use all Qualcomm components. Even if you don’t, there is nothing proprietary about it, and things will work with open standards too. The impressive bit about all this is that it is for an application most thought was a solved problem, audio. With the new use cases and voice UIs, it is pretty clear the problem is now unsolved again.S|A