Round three of the Anandtech/SemiAccurate joke starts up

CES 2018: Do we have a contest now, or just childish behavior?

There is a term of art in the journalism industry you might not know, “Bring it”. Why does SemiAccurate mention this, well basically Anandtech and practical jokes.

You might remember our little prank on Anand Shimpi formerly of Anandtech. It was funny, took over a year, and had the side effect of getting an ARM architect in the crossfire. When the smoke cleared and the bodies were carted off, both victims and several journalists got shirts and the author got two collectible Anand mugs. That was 2014.

On Saturday January 6th 2018, AMD held a tech day in Las Vegas before CES. I was there. So was Anandtech’s Ian Cutress, in fact we were sitting next to each other in the front row. No ARM architects that we know of were there, nor was Anand. During the first morning break, people started asking me what I thought of Ian’s shirt. I didn’t think much of it, it was pretty plain. Then they started asking me why I was on Ian’s shirt which had the side effect of cluing me in that something was up. 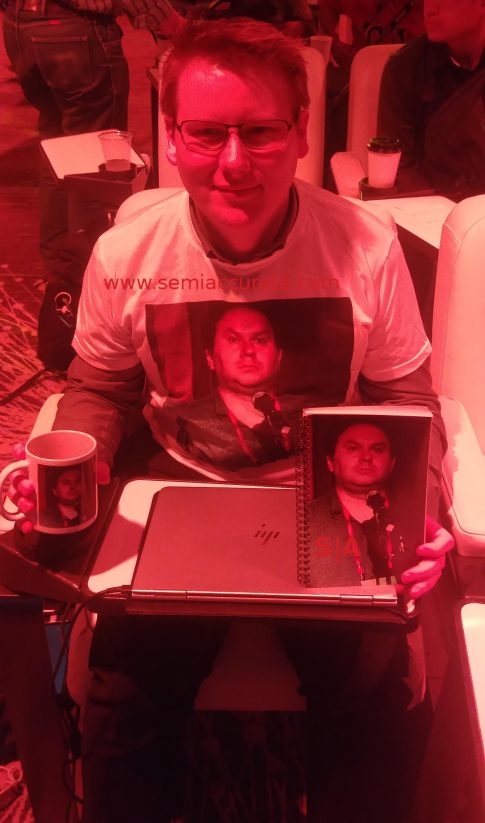 Ian wins Round 2, and it was lit really red

When I next saw the good doctor, he was indeed wearing a different shirt, a crisp white t-shirt with yours truly on it. The picture was taken at Hot Chips 2017 and the guy caught in the crossfire is none other than Xbox architect John Sell whom we believed survived this incident somehow. In any case there I was on the shirt. And the mug Ian was drinking coffee out of. And his notebook. So the game has been raised from a shirt and mug to a shirt, mug, and notebook. Fair enough.

SemiAccurate reached out to Anand Shimpi by texting him the above picture with the words, “Turnabout is fair play…”. In response to that none question, Anand replied, “HAHAHAHAHAHAHAHAA[SIC]”. This is where the, “Bring it” bit comes into play, not with Anand but in general. Let no slight go unanswered, or in this case let no joke go untopped no matter how petty the process. This is where SemiAccurate must thank Ricoh’s Anajet division for their wonderful Ricoh RI 100 fabric printer. Why? 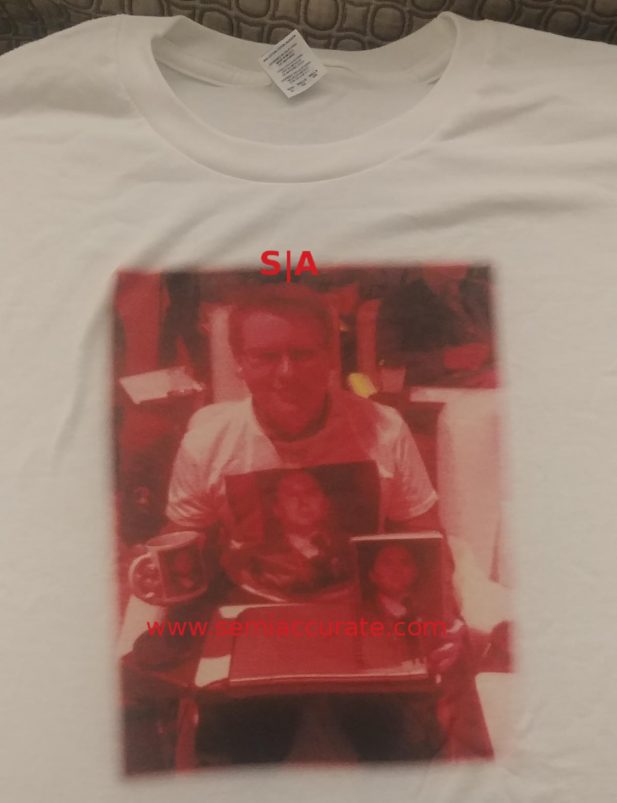 Round 3 goes to SemiAccurate

As you can see above, a hair more than 36 hours from the time of Ian’s shirt reveal, SemiAccurate has a riposte. Depending on how you count, between 36 and 48 hours from the attack comes our counterattack, a shirt of Ian Cutress wearing a shirt of the author. I will be wearing this shirt tomorrow at CES for at least part of the day. Gauntlet thrown, you have <48 hours Ian, bring it.S|A

Authors Note: Yes this is all in good fun and I do realize that I am probably starting something rather silly for childish reasons. Do you read SemiAccurate for the dry, humorless spec lists?