Qualcomm announces the Snapdragon 855 Plus SoC

Middle age sees things get better by a bit

Remember the Snapdragon 855 that Qualcomm launched last December? It is a really solid CPU that does everything well and some things, like mmWave 5G when connected to a Qualcomm X50 modem, that no one else can do at the moment. That wasn’t enough for Qualcomm though so today brings us to the Snapdragon 855 Plus. In case you didn’t get the idea from the first paragraph, adding a plus doesn’t change much but take a look at the slide for the non-Plus versions as a refresher. 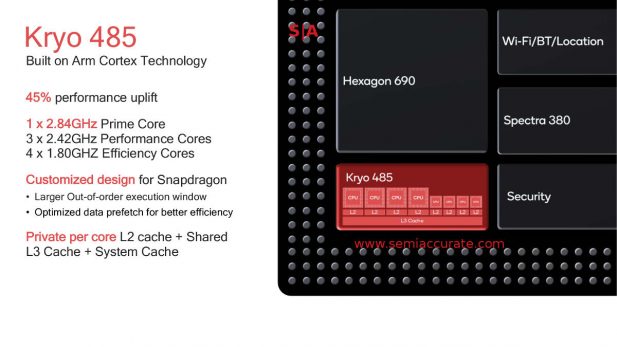 Not bad stats at all

The new Plus ups the ante by taking the clock of the prime core from a relatively meager 2.84GHz to a blistering 2.96GHz. Yes this is a bit of sarcasm, the non-Plus was pretty quick to begin with, we just think a 4.2% speed bump is not exactly the stuff of legends. The Adreno 640 GPU gets a reported 15% speed bump which we would get rather excited about if Qualcomm ever talked details about their GPUs.

4.2% and 15% are not bad numbers for a mid-life kicker if energy use doesn’t grow. That said we have those two numbers, nothing on process or power so we can’t say for sure if it does or does not grow. Given the advances in the 7nm process the 855, and presumably the 855 Plus, are built on, these advances are well within the realm of believably without upping the wattage.

In any case it looks like Qualcomm isn’t sitting still while the competition nips at their ankles. Some of them are getting close to the Snapdragon’s performance per Watt so the ante has been upped a bit. It won’t change anyone’s lives but it will likely mean a new round of phones from the big players in the next month or two, and these should beat the old ones by a little, 4.2% and 15%, Plus of course.S|A