Updated: And a partner love-in to go along with it

AMD just came out with the chip we knew they had, the 280W, 64-core Epyc 7H12. This part has oversized implications as do the new partners announced today.

SemiAccurate will only gloss over the partners because it is at an event that we are not at, have no way to ask questions, and so we won’t bang the drum for things we can’t stand behind. If you want rehashes of press releases, there are places to do that, or you can just read the press releases themselves. That said we will comment on a few of the topics released today where we can shed a little light on the implications.

First there is the new CPU, the 64-core Epyc 7H12 which ups the TDP from 225W to 280W for the SKU which is specifically aimed at HPC customers. While his part is available to anyone, AMD sounds like they are limiting it to companies that have the engineering skills to cool them correctly which in this case means liquid cooling. Atos was the vendor of note at this launch with their Bullsequana XH2000 blade which we have zero specs for but the picture is pretty… err… pretty. 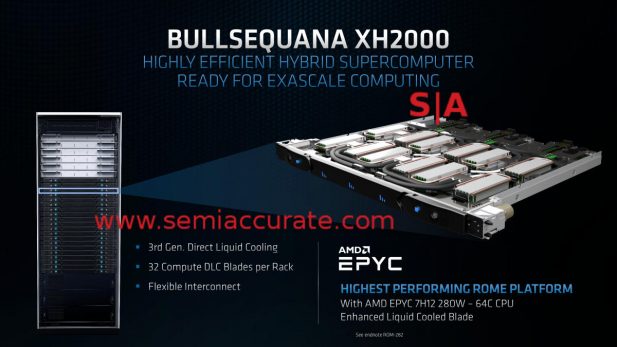 Probably has interesting details but maybe not

What does that extra 24.44% TDP get you? A base clock that goes from 2.25GHz to 2.6GHz, a 15.56% increase, and a turbo clock that either goes up or down by 100MHz to 3.3GHz. We say up or down because turbo for the 7742 is 3.2GHz all core sustained, 3.4 single core peak and as we said, question time was nearly non-existent. Our bet is that the 3.3GHz is all core sustained, it is what the supercomputer/HPC market cares about and this chip is made for them. Literally. 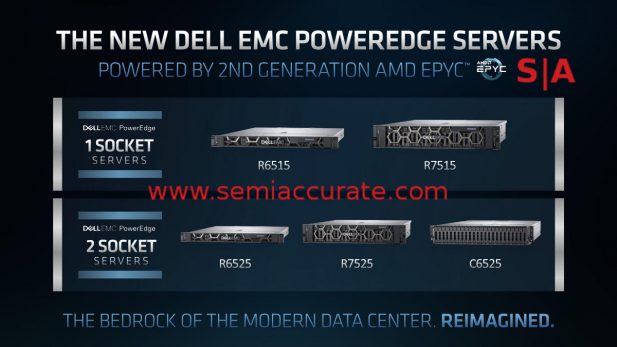 Five new toys for those who need core

The rest of the brief was about partners and there were two that really matter, Dell and TSMC. Dell released five new servers based on Rome, you can read about them here. The releases make these servers seem pretty dull but if you actually parse the details, the Poweredge C6525 is a monster, there are two 2S nodes in a 2U box meaning 256 Rome cores at speed.

You see all those drive bays in front? You can’t power them with a Xeon system, there aren’t enough PCIe lanes, the ones they have are too slow, and the system will choke on lack of inter-socket UPI bandwidth at far lower utilization. This is where AMD’s Epyc shines even if they don’t want you to know about it. Dell finally is doing AMD boxes right. (Note: We are assuming that the bays in front are NVMe capable, 4x bays. That said given the specs and web pages, we can’t actually tell for sure and there was no time to ask and get a reply before publication.)

That brings us to TSMC, hardly the company you would expect to see at an AMD love-in. Other than hugs and gushy speeches which we presume will happen on stage today, what does AMD do for TSMC? We know what TSMC does for AMD, they make the 7nm CCDs for Rome among other things, but the inverse?

Well it looks like TSMC is outfitting their data centers with AMD Epyc/Rome CPU based servers. This may not sound like a big deal when stacked up against the hyperscalers but if you think about it, EDA and verification tools are massive consumers of CPU cycles. Can you think of a company that does more chip design, verification, and work than TSMC? While there probably are a few, there aren’t many bigger in this arena, TSMC is a huge win for AMD.

AMD also went on to say they have no supply problems despite the FUD and planted stories at certain outlets in the last few days. When questioned, AMD said the TSMC announcement was not tied to any recent events, something we don’t doubt given how long it takes to set up an event like today’s. In any case everything SemiAccurate hears backs up AMD’s story, they don’t have wafer allocation or supply issues. Demand issues are another story but they wouldn’t comment on that publicly.

There were several other potentially interesting customer and partner announcements but given the lack of any useful data, we will gloss over them. Supermicro has a line of servers with Epyc that we can tell you nothing about, IBM cloud is teasing AMD systems, Nokia has some 5G core packet processing demos, and OVHcloud is doing an all flash node with Rome. Yay for speed shilling! Everyone on stage for a picture, smile, you know the drill.S|A