Today Intel releases their 8-core Tiger Lake-H mobile CPU and it doesn’t change the world. This isn’t to say SemiAccurate doesn’t like it, Tiger-H is just a bigger Tiger-non-H.

As you may recall Intel launched their Tiger Lake-U CPU last September in a way that endeared them to the press. Amid claims of victory against AMD’s last gen Ryzen 4000 CPUs Tiger-U launched without much detail. When the chips actually appeared for sale much later on, those claims were not borne out by independent testing. That said it is an entirely adequate 4C CPU in an 8C world. AMD didn’t feel the heat from this one. 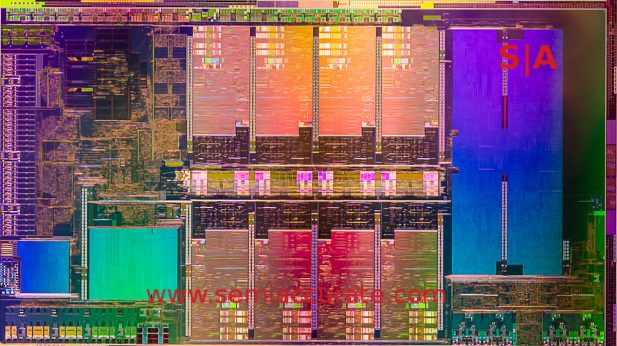 Step forward to today and we get the 8C Tiger Lake-H CPU, more cores, more PCIe4 lanes, more TDP, and more everything, a true competitor. Actually that more everything crack is a bit misleading, there is less of one thing, GPU cores. As you might expect to keep the die size down to reasonable levels, the 4C 96EU Tiger-U becomes a 32EU part to make room for the additional cores in Tiger-H. This is by far the biggest change between the two and sadly it destroys the brightest light of Tiger Lake-U, it’s graphics prowess.

Intel didn’t disclose the die sizes for Tiger Lake-U but according to Wikipedia it is 146.1mm^2 4C 96EU model and 122.5mm^2 for the 4C 64EU model so 32EUs are about 23.6mm^2. A little math shows you that a theoretical 8C 96EU Tiger-H would come in at about 237.2mm^2, large but not out of line for a high end consumer part. AMD’s current Ryzen 5000 slots in at 180mm^2, an official number that AMD actually gives out and doesn’t weasel around with unlike some other companies.

Speaking of weaseling, Intel said the die size for Tiger-H was around 190mm^2, a fair number and about what was expected. When asked for an official number, the footgun came out and we got, “The die size and transistor density are proprietary to Intel and we are no longer disclosing that detail.” If you have not been keeping track of things, let SemiAccurate give you our magic Intel statement decoder methodology. If they dodge a basic question it means they lose badly but won’t break message no matter how clear the facts are. At this point you should ignore every other claim they make for obvious reasons. This has served SemiAccurate well for several years now, may it serve you equally faithfully in the coming times.

That die size more than anything shows Intel’s current plight, that 180mm^2 AMD CPU pretty much destroys Intel’s Tiger Lake-H at everything bar PCIe4. Intel claims victory on every front but a close look at the numbers shows this isn’t the case. Intel seems to be comparing a 45W TDP Tiger-H to a 35W Ryzen 5000, quite the advantage there. The biggest problem however is that Intel only compares the two with a high end Nvidia 3060 GPU, apples to apples there but it misses the point, Tiger’s strength is the GPU, or at least was.

The utter lack of any benchmarks with the integrated GPU should tell you all you need to know about Intel’s competitiveness in mobile for 2021. An 8C 96EU Tiger-H would go a long way towards making these new parts competitive but that would both cost a lot and suck too much power, both of which are untenable for Intel.

Using more power would not be a technical challenge and a 96EU part could also be done in the same 45W TDP as the 8C 32EU parts. Unfortunately that would mean the frequency of the cores would be severely limited in real world usages by the added power draw of the GPUs, something which would undoubtedly show up in gaming. Since Intel’s main competitive messaging is solely based around clock speeds on the spec sheet, this is untenable. Intel will probably make the argument that anyone buying a CPU of this class will opt for an external GPU but that misses the point, AMD has better CPU _AND_ GPU performance while using 10W less and does it with a smaller die.

Smaller dies bring us to the next problem, cost. Despite vague references to the contrary, Intel is still at a fraction of their needed wafer starts at 10nm, something SemiAccurate doesn’t see changing before 7nm arrives hopefully in mid-2023. Yields are still far lower than they intone, something we still see as being economically non-viable. A big die is fine if you can charge for it but AMD’s performance leadership in effectively all areas makes this a moot point. If there was any chance for an 8C 96EU Tiger-H, finances ended the possibility early in the game. Pity, the author would have bought one if it existed. 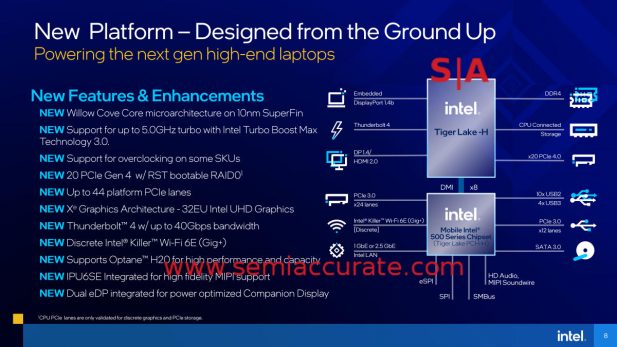 The features as you would expect

So now that we have ranted, what is Intel actually launching? As you can see in the diagram above there are a few changes to Tiger-non-H, core count being the big one. PCIe4 lane count is now 20 which can be split as 16/4 or 8/8/4 which means sane storage and GPU configurations are actually possible now. The older non-H Tiger had a woefully inadequate 4 lanes so it was storage or GPU, both were not an option. Wi-Fi gets an E added to the 6 and Killer functionality is tacked on. In short is it a little more here and there but no big bangs.

One thing worth calling out is the ‘overclocking’ that Intel wants to claim as a victory. Once again they artificially fuse off overclocking functionality and sell it back to users on some SKUs but not others. The tools are Windows only so the functionality is pretty much useless but the way they extort money for it does piss everyone off no mater which parts they want. Own goal once again. AMD doesn’t do this but sells a faster CPU with a lower TDP on a smaller die. Why is this important? See Intel’s Q1 analyst call if you are unclear. 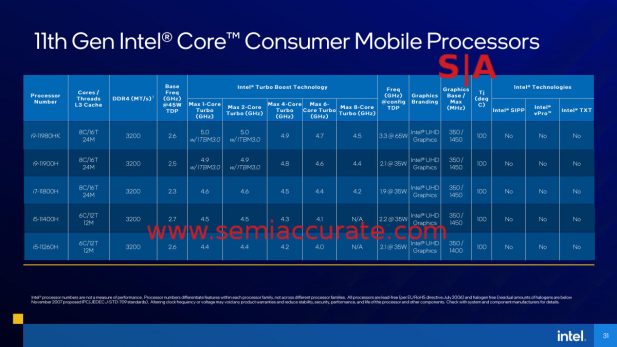 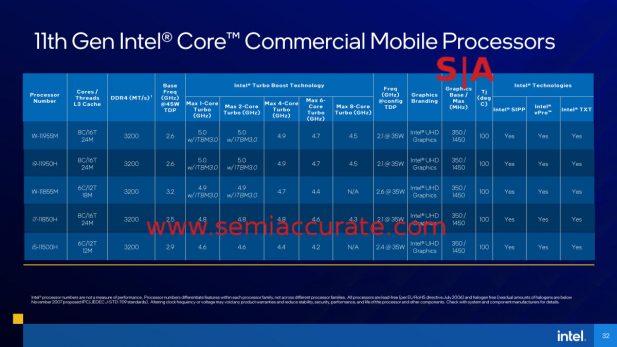 The SKUs themselves are about what you would expect with 6 and 8C variants from this new die. On the top i9-11980HK part the peak 1/2C turbo goes up 200MHz, mostly made possible by the added TDP of the -H models. One thing to note is the delta between the ‘config TDP’ and the 45W TDP, it should give you a very good idea about the competitiveness of Tiger-H vs a 35W AMD part. Other than that, no real surprises.

As SemiAccurate has been saying for years, Intel’s 10nm process is broken in many ways. They are forced to jack up the power to get frequency and while Tiger isn’t as bad as Ice Lake, it is still well past the knee of the curve as you can clearly see. The results of these self-inflicted wounds brought on by marketing decisions overriding correct technical ones have some very long lasting effects but this doesn’t seem to change behaviors.

One last negative note, Intel regressed quite a bit on disclosure this time around. As we have been saying for years now, Intel is the gold standard for correct disclosure unlike AMD’s deceptive practices. This time around Intel went the other way and effectively removed all disclosure, proper or not. In several slides they say, “See Appendix for workloads and configurations. Results may vary.” There is no appendix in the deck. We hope this is just a one off mistake.

So in the end the new Tiger Lake-H CPUs close the gap to AMD quite a bit but don’t beat the Ryzen 5000 mobile parts at anything as far as SemiAccurate can tell. On tasks that are vaguely graphics related, the older Tiger-U should destroy the -H, CPU heavy tasks should be a clean kill for the 8C model. The real benefit will come from the 16 added PCIe4 lanes, it will allow for configurations with real storage and GPU bandwidth. Other than that Tiger Lake-H is like Tiger Lake-U but more.S|A