Computex 2021: Solid goodies and a twist

AMD has a bunch of goodies at Computex including CPUs, GPUs, and software. All of the offerings are solid but none of them really surprised SemiAccurate.

On the CPU side there are two new desktop APUs, the Ryzen 5 5600G and the Ryzen 7 5700G, yes these are the long awaited Zen 3 based APUs of legend. There was a back story about a lone adventurer going through the deepest darkest jungles in a harrowing adventure to unearth these CPUs but we can’t be bothered to make it up. Instead we will just fall back on the old excuse of limited capacity and not wanting to cannibalize the non-APU Ryzen line for the delay. 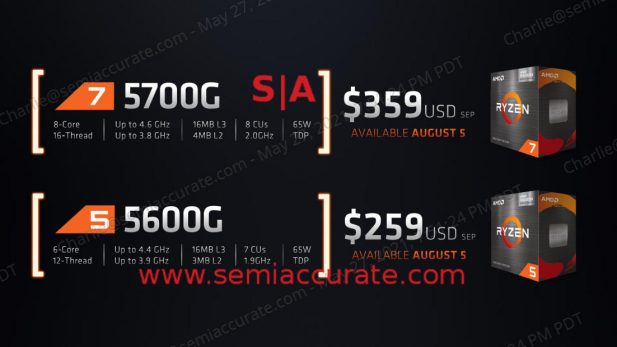 As you can see these APUs are pretty much what you would expect and they bracket the 5600X in price, one above, one below. The main difference, other than the GPU of course, between the APU and the CPU Ryzens is of course the cache. The APUs have half the L3 of their big brother CCD that goes into Ryzen CPUs with an X or at least without a G, Threadrippers, and Epycs. This will decrease performance a bit but not enough to notice without a benchmark.

So what should you buy? Given the utter lack of GPU availability on the market at the moment, something that is unlikely to change until Q4, if you are looking to build a new PC, these Ryzen G’s might be a smart move. You can always upgrade to a discrete GPU when you sell that kidney to pay for it and still have a functioning box that will play games acceptably in the mean time. Whatever you choose, the desktop Ryzen 5600G and 5700G aren’t a bad choice even if they did take too long to come out.

So what happens if you take these Ryzen 5000 desktop APUs and don’t blow a few fuses during manufacturing? You get the Ryzen 5000 Pro APU line in desktop form. You might recall the mobile version of these parts were launched in March and the desktop versions have all the same capabilities, security, manageability, stability, and longer shelf life than a Twinkie. 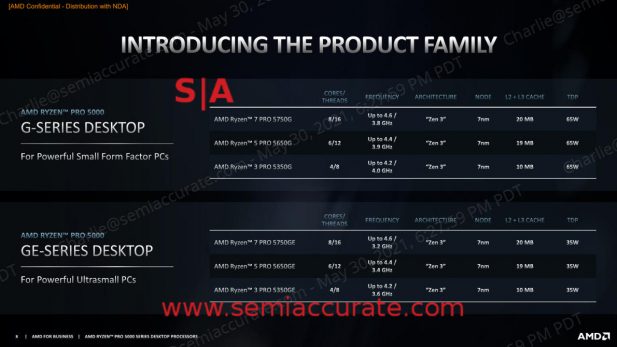 The new twist to this story is in the branding. Mobile Pros were either branded with a, wait for it, Pro moniker but were otherwise a pretty standard R5K mobile U-Series CPU. Don’t blow those same fuses and put the APU in a desktop package and off you go, six new Ryzen Pro 5000s. No blizzard of customer antagonistic SKUs, three 35W parts, three 65W, 4/6/8 cores, and all are Zen 3 based. Cube farm denizens rejoice, your upgrade is on the horizon.

Now on to the fun stuff, the new Radeon 6000 mobile GPUs. Imagine if you take the same die as the Radeon RX 6700XT and clocked it down 124MHz peak turbo and an undisclosed amount on the memory side but kept everything else more or less the same. Sure the firmware and likely the base clocks, not that they really exist any more, are going to be different for the differing use cases, but no major changes in the silicon. That is the new Radeon RX 6800M and it makes a pretty amazing mobile GPU don’t you think? 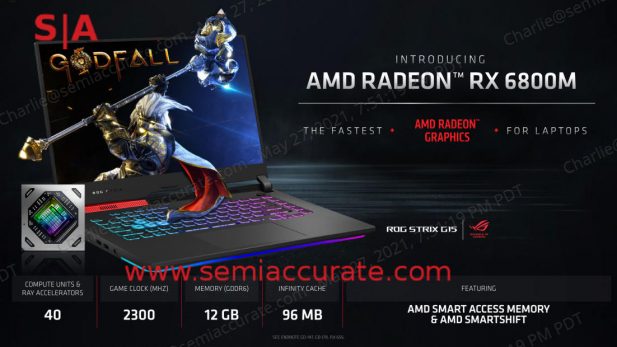 Top of the line mobile for the near future

As you can see, of the specs AMD listed on this preview, only the peak turbo aka Game Clock changed from the 6700XT. The rest of the unlisted changes undoubtedly drop TDP from the 230W of the desktop version to a more manageable number for mobile thermal envelopes. And yes the Infinity Cache is unchanged at 96MB, those claiming otherwise don’t understand energy use in modern GPUs, this is a killer feature for power savings.

In any case these parts should be pretty impressive mobile contenders for two reasons both of which are power related. Process choices and process mistakes are the key to this story, we gave you the long version on the desktop front here. Needless to say pushing a GPU to the energy use limit for marketing reasons is not a wise choice in a mobile format either so AMD has a lot more headroom and conversely the ability to drop energy use while still leading in performance. The Infinity Cache we mentioned earlier is the other reason, not having to go off die for memory as often is a massive win in mobile, it will pay dividends. While we haven’t seen any real world testing with these parts, SemiAccurate expects the results to be impressive.

Last up is something we don’t normally cover because it falls under the heading of software that is Windows specific but theoretically can be ported to adult OSes but never will be, AMD’s FidelityFX Super Resolution. It does what it says, basically upscales a game to a higher rez while doing some image sharpening tricks to make it look like it is natively rendered in that higher rez. The end result is a lot less actual work done to get the image rendered which translates into higher frame rates. 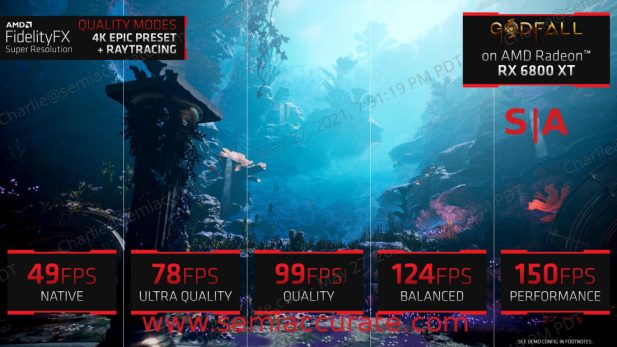 As you can see there are five preset modes and the results look… well we have no idea but in theory it should be pretty good. If we ever see one working in person we will let you know how it looks but since the games that use it are supposed to debut on June 22nd, you can get your hands on one at the same time we can. But wait there’s more. 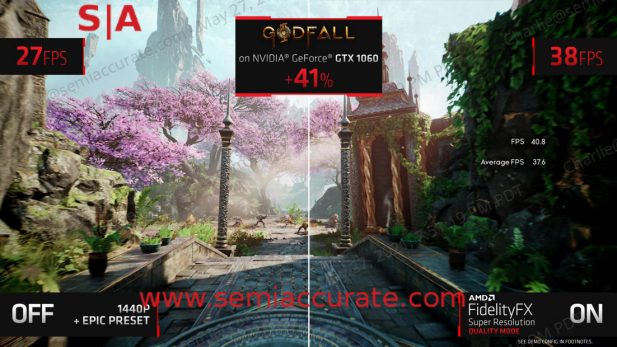 Works on Nvidia too

Unlike certain other companies that take their APIs and use them for lock-in or at least to lock out the competition, AMD’s FidelityFX Super Resolution doesn’t. It works on Nvidia and presumably Intel GPUs just as well. In fact AMD demo’d it on a GeForce GTX 1060 to show how far back their wares are compatible. It may be a knock off of Nvidia’s version but it isn’t exclusionary and it doesn’t come with a hefty license fee, it is free for devs. So if your choice was a proprietary API with a large price tag and strings attached or a free, open, and broadly compatible one, which would you choose?

In the end AMD’s Computex 2021 offerings are pretty solid, two consumer APUs, six Pro APUs, three mobile GPUs, and a rather clever bit of software. None of these things were unexpected, OK the Nvidia compatibility came out of nowhere, but they all are worthy contenders in their target markets. Not a bad showing overall.S|A