Giada shows one of the first Brazos mini-PCs

CES 2011 Leftovers: The only complete unit at CES

YOU PROBABLY ARE not too familiar with Giada if you live in the US, but they are starting to make some pretty interesting products. At CES this year, they had the only finished ultra-slim Brazos HTPC that we ran across.

The system is called the A50, with either a E-350 or E-240 CPU and a Hudson M1 chipset under the skin, and one SO-DIMM slot. Along the edges, there are enough ports to keep most HTPC customers happy. Best of all, it has one USB3 port.

Given the size, the company did a pretty good job packing in four USB2 ports, ethernet, HDMI, VGA, and a multi-card reader. All this in less than 7.5″ x 6″ x 1″, and it will only suck a maximum of 30W. DX11, 1080p video in hardware, and it takes 5W less than their Atom + Ion combo. The only down side is that it comes with Windows. 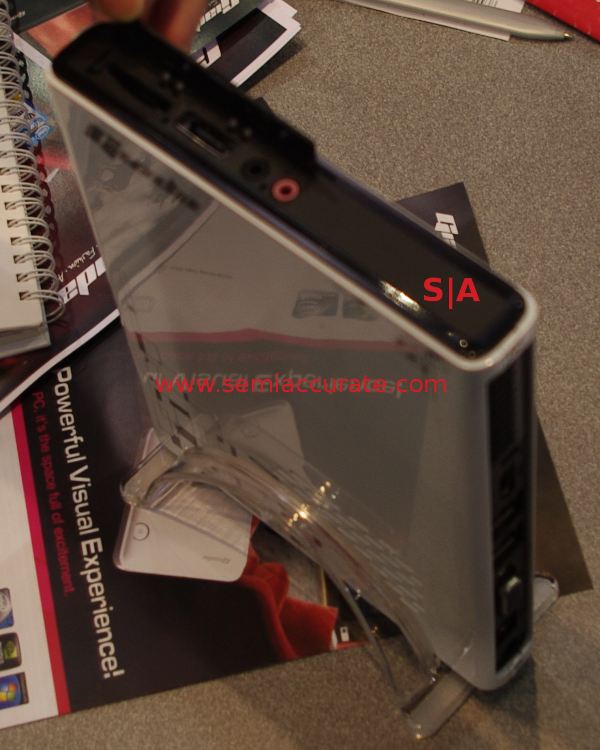 Tiny and working at CES

This looks like the perfect box to put beside a TV, it has much more CPU power than the Atom version while adding USB3. The only question left is cost. The Atom and Ion variants run from about $200 to above $300, and there is also an i3/5/randomnumber version with a ‘UM’ class mobile CPU. This won’t be in the same price league though unless Intel does some things that they seem legally obligated to avoid.

As of CES, the prices were far from final. Since then, demand has far outstripped Ontario and Zacate supplies, so it if you can find a board, it is usually at exorbitant prices. As of this writing, there was one A50 listed for sale that we could find, and it is not in stock. Once the initial demand is over, we would expect these PCs to come in just a little above their Atom + Ion counterparts, and way below the UM iSomethings. Given the features, that price is a positive steal.S|A