A look at the new AMD names

A few new ones, and some oldies too

A lot of people are familiar with some of the new AMD (NYSE:AMD) naming systems, more specifically E and C series for Brazos chips, but there are a few more. To clear up some confusion, we thought we would go down the list of what is what in AMD naming land now.

Some of these names are public, but some are not yet, so if you have been paying attention, there probably won’t be any surprises. The E- and C- lines are the same chip at different wattages and speeds, with somewhat different applications. E- is for 18W parts, and was code named Zacate, while C- means 9W and has the code name Ontario. E- is followed by three digits, C- by two, and they seem to connote nothing. Core count, GPU type and everything other than wattage is not encoded in the number.

The E- and C- lines are Bx stepping chips, and there will be a new C0 step in the near future. It will enable a 5W variant, and that will be called the T- series. There have been a lot of rumors about the reason for C0, but after weeks of digging, the only concrete thing we can find is that it is mildly reworked for lower power use. In case it isn’t blindingly obvious, the T- is for tablet, and it is not the same as the G- series ‘T’ below. When it is announced, it will hopefully put to rest the rumors about AMD not having a tablet strategy, but we aren’t holding our breath. 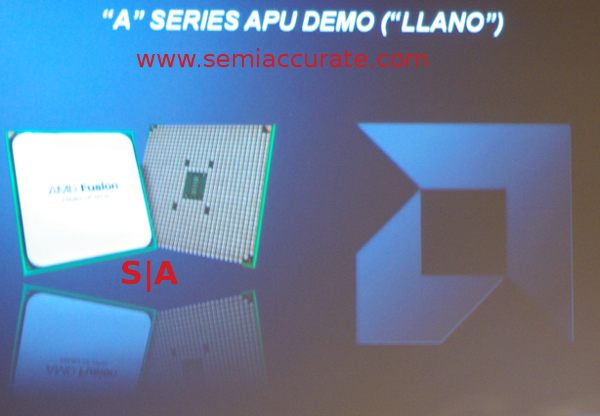 Another one that isn’t widely touted is the name for the upcoming Llano chip. This one, as you can see from the above slide, is called the A- series. As newer variants hit the market, you will probably see this split into multiple lines just like the K10.x chips, but those names are not public yet. Expect mobile, desktop, and game/FX variants before the dust settles.

Last up, we move on to the embedded front, and the G- series. This line has by far the worst naming scheme of the bunch, not Intel bad, but definitely a step backwards. Why? The G- Series chips are all all named T##x, with the ## seems to indicate nothing at all, just that they are different. The x suffix is one of three things, N, R or L, with N being dual core, R is single core, and L stands for no graphics but not core count. The suffix has the only useful info in the names, the rest is pointless. Aaargh!

In the end, not much more to say. The new naming scheme is fairly clean, but doesn’t really move things forward. The series prefix is a good differentiator, but the numbers don’t add anything to the mix, they are just placeholders. Two steps forward, one back. Given how damaging to the consumer most modern marketing is, this is almost a breath of fresh air. That’s good, right?S|A