Gigabyte brings the Killer line into the Z68 era

Gigabyte is putting out a killer new board, or is that a new Killer board? Either way, the gaming line the company launched at CES has moved in to the Sandy Bridge/Z68 era. 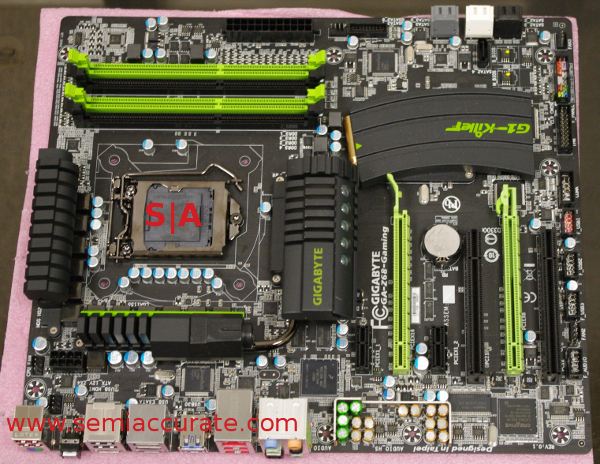 What you see is not the name you get

The board that you see above is almost the final product, the only thing that will be different is a few of the names. It is not the G1-Killer, it is likely going to be called the G1-Sniper 2, but that may yet change. Ignore the stencilled name on the PCB too, it is a prototype. Either way, if you are thinking gaming Sandy Bridge, you would be dead on. Yes, the Killer line has moved past the x58 chipset.

Short story, take a Gigabyte Z68 board, add in a Creative sound chip with 5 amps and some pretty hefty noise isolation, toss in a Bigfoot Killer NIC, and you have the basis for this board. Throw in tons of 3x power USB ports, red for USB2, blue for USB3, and then space them wide enough to use real world devices in. No really, look at the gaps between the port shields and compare that to a standard mobo, those few mm they are spread apart do make a big difference.*

Other than that, not much to say, the G1-Sniper 2 is a high end Z68 board with all the tweaks you would expect from a gaming rig. This time around, the only thing lacking is lots of PCIe bandwidth, but if you want that, there is always the G1-Sniper no-2. It should be out in the near future, line up outside your local store now, and feel more intelligent than the iDrones waiting on the other side of the mall.S|A

*Editor’s comment: A huge difference, mm matter.  I have to run USB extension dongles and hubs to get everything to fit right now.