IBM (NYSE:IBM) has manufactured the first silicon that mimics neurons and synapses.  Tired of your good old von Neumann computer that is fast and uses a lot of power? Well, IBM may eventually come up with a solution in cognitive computing.  The company has just unveiled the first 2 processors that depart radically from all other chips that all use the von Neumann architecture with fixed instructions and memory, the company writes in a press release.

IBM has two working prototype designs. Both cores were fabricated on 45 nm SOI-CMOS and contain 256 neurons. One core contains 262,144 programmable synapses and the other contains 65,536 learning synapses. The IBM team has successfully demonstrated simple applications like navigation, machine vision, pattern recognition, associative memory and classification. The chips are manufactured in IBM’s own facility in East Fishkill, New York.

IBM has not divulged the clock frequency of the chips, but Dharmendra Modha, who leads the research team, has earlier told SemiAccurate.com that the chips would be significantly slower than traditional microprocessors. Where a typical microprocessor runs at several gigahertz, IBM has been looking at frequencies as low as 10 Hz. Yes, you did read 10 Hz – approximately the same speed as the human brain. 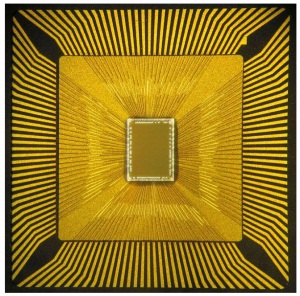 IBM's Cognitive Computing Chip, at about 3-mm wide, has demonstrated the ability to play (and win) against a human in the game "Pong" and can also read a written letter 7, even when written in various ways. (Photo courtesy of IBM).

“This is a major initiative to move beyond the von Neumann paradigm that has been ruling computer architecture for more than half a century,” said Dharmendra Modha, project leader for IBM Research. “Future applications of computing will increasingly demand functionality that is not efficiently delivered by the traditional architecture. These chips are another significant step in the evolution of computers from calculators to learning systems, signaling the beginning of a new generation of computers and their applications in business, science and government.”

The 2 chips are just the first step and future chips will be able to ingest information from complex, real-world environments through multiple sensory modes and act through multiple motor modes in a coordinated, context-dependent manner, IBM writes in the press release.  IBM has a rich history in the area of artificial intelligence research going all the way back to 1956 when IBM performed the world’s first large-scale (512 neuron) cortical simulation.S|A