DDR4 shows up in the wild

And of course it is faster and better than DDR3.

The first two DDR4 chips come from South Korea. More precisely from Samsung and Hynix.  They made their debut during ISSCC last week.  And we might as well getting used to saying DDR4 as it is just a matter of time before they start showing up in earnest – first in servers, but later also in PC’s and eventually also in mobile devices.

Compared to DDR3 there are several distinct advantages of DDR4. 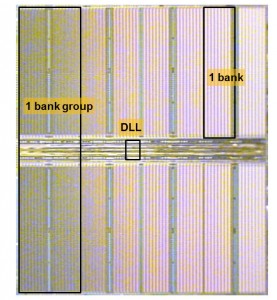 Let’s first look at the speed, where the DDR3 specification runs out of steam at 1.6GB/s.  DDR4 doubles this speed to 3.2GB/s.

In addition the DDR4 standard employs features such as CRC, which helps ensure data integrity that in the DDR3 standard merely is governed by parity and a much simpler ECC scheme.

The voltage is lower at 1.2V compared to 1.5V for DDR3, but even with a slightly higher current, there is still a power savings of around 15% in the core and a total platform savings of around 40% due to the higher transfer rates.

Hynix showed off a 2Gb chip fabbed in 38nm technology, and Samsung upped them a bit with a 4Gb chip fabbed in 30nm process technology. It should, however, be noted that the Hynix chip contains a novel half page design that sets it apart from the Samsung chip. S|A