3M and IBM get into the skyscraper business

Invents heat conducting glue that will allow stacking of up to 100 layers.

Tech Giants 3M (NYSE:MMM) and IBM (NYSE:IBM)  have combined their research talent and come up with a new glue that will allow them to stack chips with up to 100 semiconductor layers, the companies write in a press release.

The extremely interesting part about the announcement is that the glue is heat conducting and therefore will allow logic chips to be stacked. With existing technologies such as edge wiring or Through Silicon VIAs is has only been possible to stack memory chips up to 4 layers due to problems with heat dissipation of logic chips – also more commonly known as microprocessors, FPGAs and ASICs. 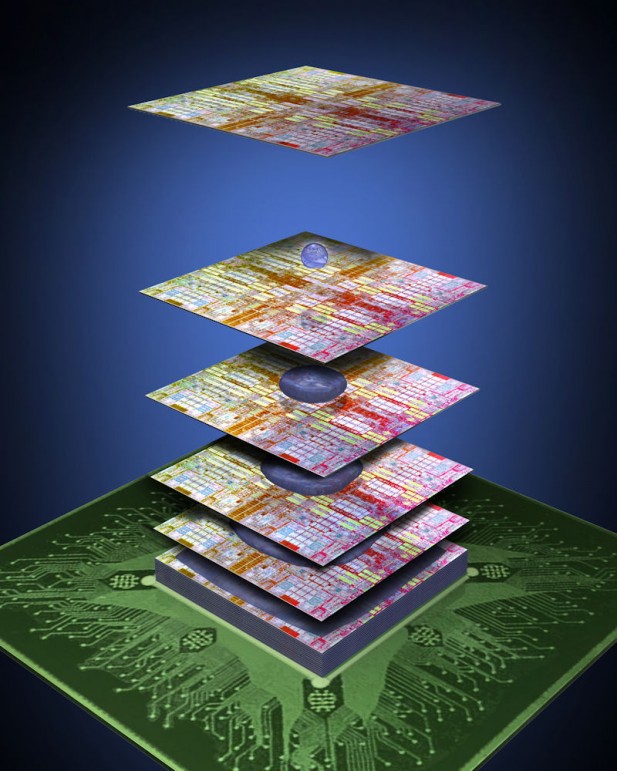 IBM and 3M Corp. are developing a new type of electronic “glue” that can be used to build stacks of semiconductors – 3D chips. The glue, shown in blue above, connects up to 100 separate chips as it conducts heat away from the silicon package. Illustration courtesy of IBM.

In the initial phase the company will stack individual chips, but the long term plan is to glue entire wafers together and the cut them into separate chips afterwards.

Even though IBM uses the term 3D correctly in their press release it should not be confused with Intel’s incorrect use of 3D, when it released its tri-gate transistor. Intel’s transistor is also a major feat, but it turned the transistor on its side minimising the contact with the underlying substrate.  The two techniques can easily be employed at the same time.

3M and IBM plans to use the glue in chip stacking starting in 2013 with 20nm process technology.

“Today’s chips, including those containing ‘3D’ transistors, are in fact 2D chips that are still very flat structures,” said Bernard Meyerson, VP of Research, IBM. “Our scientists are aiming to develop materials that will allow us to package tremendous amounts of computing power into a new form factor – a silicon ‘skyscraper.’ We believe we can advance the state-of-art in packaging, and create a new class of semiconductors that offer more speed and capabilities while they keep power usage low — key requirements for many manufacturers, especially for makers of tablets and smartphones.”

The glue will also allow for the manufacture of hybrid chips that contain layers of logic elements as well as layers of dynamic memory, flash memory or another memory technology thereby paving the road for very powerful and compact SoCs.S|A