Gone are the days of expensive SLCs with low capacity.

“The Intel SSD 710 Series gives enterprise data center and embedded users extreme endurance and performance, enabled by Intel’s High Endurance Technology based on Intel 25nm MLC NAND technology,” said Tory Winslow during the press conference. “Intel SSDs are widely deployed in the data center due to their performance, reliability and value. Our latest SSD product family offers more than 30 times the write endurance of our current MLC SSDs, plus improved performance and new features, such as power-loss data protection and surplus arrays of NAND for enhanced reliability.”

Intel achieves the endurance by binning the flash chips and only using the very best for their enterprise drives. This binning is being combined with advanced controller algorithms to minimize write amplification. 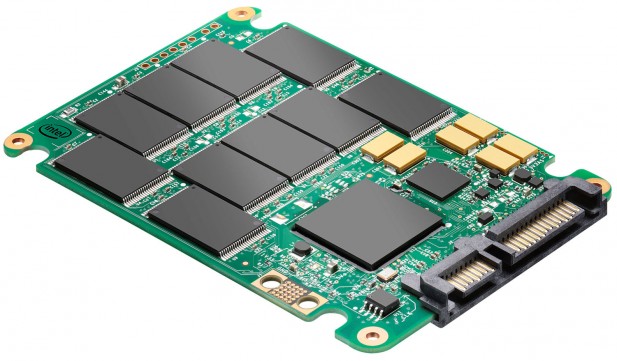 Intel's latest enterprise drive is based on MLC fklash. Photo provided by Intel.

The Intel SSD 710 delivers nearly the same endurance as SLC-based NAND SSDs, but utilizes the higher capacity and more cost-effective MLC NAND. According to Intel it achieves write endurance out-of-the-box of up to 1.1 Petabytes (PB) and comes in 100GB, 200GB and 300GB capacities. he The Intel SSD 710 achieves a 4K random write performance of up to 2,700 input/output operations per second (IOPS) and 4K random read performance of up to 38,500 IOPS across the full span of the drive, making this a suitable replacement to an SLC SSD or multiple enterprise-grade hard disk drives.

Intel also previewed 2 additional drives. These drives are meant for enthusiasts. One is a very high performance drive for gamers while the other is a caching product that can be combined with a traditional hard drive.

You may or may not like Intel’s processor strategy, but it looks like Intel is heading in the right direction as far as storage goes.S|A