AMD (NYSE:AMD) was doing their usual counter-IDF demos in San Francisco last week, complete with 28nm GPUs and Trinity laptops. No specs were disclosed, but insiders tell SemiAccurate that both chips are in good shape.

28nm GPUs up and running

What you are seeing here is a 28nm Southern Islands/GCN/HD7xxx laptop chip running in a bog-standard AMD mobile development board. The card itself is an MCM, but that is about all AMD would say, no specs or release dates. Luckily, we know the dates already, and insiders tell us it is Tahiti silicon. (Note: Yes, I know about the rumors, but I’ll take my sources’ word any day). These parts tipping up in December, subject to the whims of ODMs and OEMs (Note 2: I know those rumors too, some ‘journalists’ seem unfamiliar with how to use a calendar, December is actually still in 2011).

Not really a fair fight

The other interesting bit is another showing of the Trinity laptop again. This time it was not just a simple ‘raincoat’ demo(1), it was a full system running Deus Ex at speed. Next to it was an iSomethingmeaningless laptop, and the results were not pretty. If you think Intel has acceptable graphics, you haven’t played with a Llano system, and Trinity ups the bar significantly. Then again, you can actually find an iSomethingmeaningless system…… 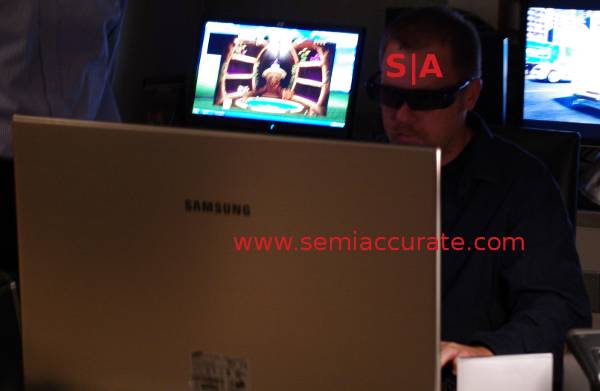 The last demo was a slick one, we call this one ‘Nate’. Nate was playing a game in 3D on one of the new Samsung 120 HZ 3D 27″ LCD monitors. This monitor is simply one of the best ones I have yet seen, it is truly stunning in person. The 3D side is pretty forgettable because it is 3D, but if they offer this model sans glasses, take a long look at it. As you can see, it is making Nate smile.S|A

(1) Raincoat demo: Where a presenter runs out, flashes something at you, and before your jaw (hopefully) stops hanging loose, they close the raincoat and run away.