IDF 2011: Samples for dinner and gaming

One question Kingston always asks at trade shows is how do you show off large memory capacities? A show or two later, you often see some of the suggestions like Audio Studio in their booth.

The demo this time was a lot more interesting than it looks, it isn’t just another audio tool, it is real time audio in a game. The game engine in the corner of the screen is the key here, everything else is slaved to it. It may look simple, but the point isn’t graphics, it is sound, real time sound and music.

At the heart of the rig is an Intel 2600K with 4 x 4GB Kingston DIMMs, HyperX DDR3 in case the logos didn’t give it all away. The audio software is linked to the engine, allowing you to set up and tune the sound effects and more importantly music to the gameplay. The problem is that to do this in real time, you need a lot of samples in memory, disk is way too slow.

In case you don’t see where this is going, you need lots and lots of memory, the 16GB here isn’t enough to actually do a full orchestra. For that kind of scoring, you need upwards of double that, 32GB should be roughly adequate. For now. The final game can reduce the sample size, load a subset of samples for the current area/level, and other compression tricks, but for creation, this kind of optimization gets in the way. 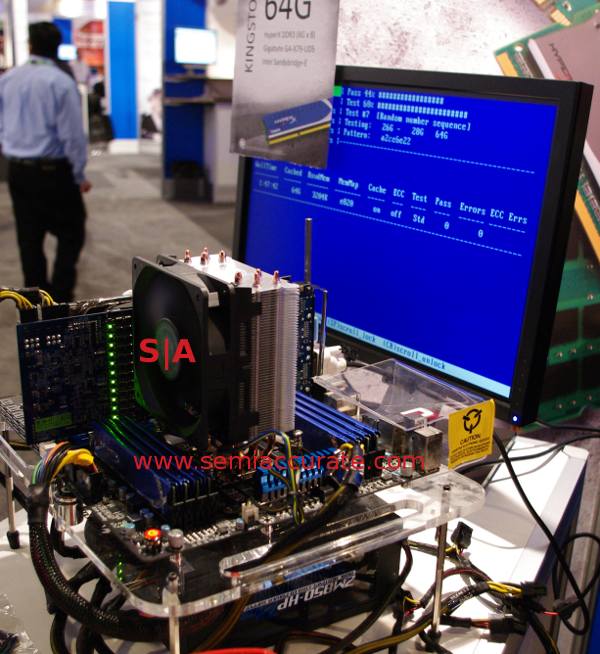 Luckily, help is on the way. Just to the left of the Audio Studio demo was a Sandy-E system cranking away on a memory tester. I think the Kingston Spokesmodel was on level 4 at this point, but I don’t play that game enough to tell. For me it gets boring after 0x00DEADBEEF, but others seem fascinated.

In any case, the system above is running 8 x 8GB DIMMs, 64GB of HyperX goodness on a Gigabyte GB-X79-UD5 board. Anyone notice that there are no 8GB HyperX dimms in the Kingston parts list yet? Nor is Sandy-E official yet. Hmmm…….

So for the next while, we have an answer to the age old question about large memory demos, audio creation work. With CES coming in a few months, anyone got any ideas about how to use massive memory counts in an interesting way? Best suggestions win a gold-plated nothing, with three runners up winning a silver-plated nothing.S|A