IDF 2011: Not for the reasons you think though

Intel (NASDAQ:INTC) put on a demo of a solar powered CPU at IDF two weeks ago, but that demo wasn’t about what most people think it was. The CPU in that demo didn’t really matter, nor did the solar power, but the transistor technology used to do it mattered a great deal.

The demo itself consisted of a CPU plugged in to an old Pentium motherboard, and it was ‘run’ off a solar cell. This isn’t to say the whole system was run off the solar cell, just the CPU, the rest was pulling power off of a good old power supply. It all looked liked this. 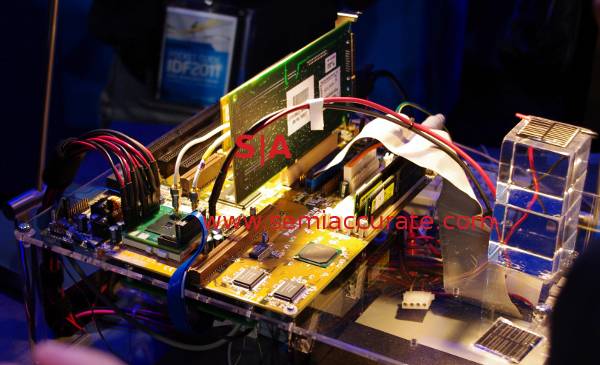 You can see the solar panel on the lucite block to the right, it is pretty small, probably putting out a watt or so, not much power. As soon as the light was interrupted, the demo machine froze, so things were running right on the edge of functioning. Ironically, that is the point of the demo, threshold voltages, not TDP.

The CPU was a good old Pentium derivative, likely a P54C, built on a much more modern, likely experimental, process. The Pentium line was built on .65-.25 micron processes, so one built on a current 22nm or below process would be tiny, less than 1mm^2. This chip is obviously much bigger than 1mm^2, so that tells you something about the process it was built on.

Back to the point, this demo is all about threshold voltages, not absolute power. Just based on shrinks, a shrunk Pentium would take almost no power by modern standards sub-1W. The idea is to run the transistors at as low a voltage as you can, and see what the outer boundaries of switching on and off are. Threshold voltage is the point where more volts mean the transistor is on, less mean it is off.

To simplify the issue a lot, the closer you can get to that number, the less power you use. Wattage goes up roughly with the square of the voltage, so dropping things a little can save a lot of power. The more power you save, the more transistors you can pack in to a chip, and the more performance you get for the same TDP. A shrink means 2x the transistors in the same area, but lately, power use has not been keeping that same downward slope. If you were wondering why voltages of CPUs keep going down a little while TDPs creep upward, this is why.

Running the CPU at barely above the threshold voltage saves lots of power, but it also has lots of problems. Again to overly simplify, there are two problems, turning on, and how quick it turns on. A modern CPU can have billions of transistors, and they are not all uniform. The threshold voltage for most of them is in a narrow range, but with a billion of anything, it isn’t hard to find an outlier, either up or down. The closer you run to the threshold voltage, the more likely you are to have one of those outliers not turn on, and the chip not work. This means you have to have a safety margin, and that translates in to more voltage than you really need for 99.9999% of the transistors.

Another problem is switching speed, the lower the voltage, the harder it is to maintain a given switching speed, and therefore a given clock speed. Another simplified analogy is a garden hose. If you turn it on, there is a time delay before water comes out the other end as the hose fills. The more pressure you have, the faster it is until you see the first spray of water. Voltage is similar, the more you have, to a point, the faster you can turn the transistor on. The closer that max voltage is to the threshold, the harder it is to turn a transistor on quickly.

Both problems are a lot tougher than they seem, and both are solved by bumping the voltage up a bit more than you absolutely need. This is easy to do, but again, makes a CPU use a lot more wattage than the same part running barely above threshold voltage.

Imagine a simplified hypothetical CPU that has a .75V threshold voltage and would typically run at 1V for real world and pull 100W at TDP. If you could run it closer to the threshold, say .8V, you would only be consuming (.8^2) * 100W, or about 64W. This saves 1/3 of the power just by running the chip at a lower voltage. These savings would be in addition to the normal process related power savings, so the combination would be huge.

Intel was showing off that they could do just that, run a CPU complex enough to run Windows, albeit slowly, at barely above threshold voltages. What they learned from this research project will be translated in to the future CPUs you buy, and it will directly benefit the buyer. Solar powered CPUs are a neat demo, but the real impressive parts were somewhat underplayed. In case you had any doubts, they were very impressive parts, and hard to do too. Well done.S|A