MWC 2013: Faster than a speeding A15 shaped bullet

ST-Ericsson was showing of a 3GHz dual core tablet at MWC, not bad for the venerable ARM A9 core. The device was a prototype but 3GHz is not an easy target for anything much less a full tablet SoC chip.

If you recall, the ST-Ericsson NovaThor L8580 was built on ST’s new FD-SOI process to boost frequencies from 1.85GHz to 2.5GHz in a shipping SoC at the same power. At CES a 2.8GHz demo device was shown off, and today at MWC they had a 3.0GHz chip in an engineering demo form factor. It wasn’t pretty, but it sure was fast. 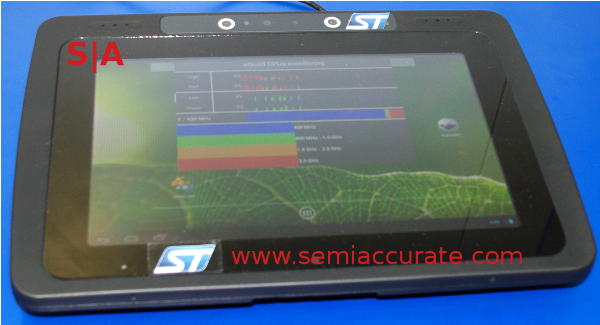 The tablet that outclocks most desktops

The color bars on the screen represent clocks with blue at 400MHz idle and red being 3.0GHz peak clocks. It measured the speeds since boot, basically not doing much of anything. A few demos were run against a Nexus 10 with a two code 1.85GHz ARM A15 CPU and the NovaThor L8580 beat it by a little bit. ST didn’t want to comment on the power draw of the Nexus’ CPU, but you can be pretty sure that it wouldn’t have been shown if the Nexus 10 was much lower.

Overall the chips perform about on par with a 1.8-1.9GHz A15 core, understandable because of the older architecture. A15s are generally considered to be relatively power hungry in comparison to the A9 core so you could potentially do a lot better with the L8580 than an A15 of similar performance. Since single threaded performance scales well with clock, any theoretical performance gains should equate well with the real world.

What more can you say? A dual core A9 boosted from 1.7GHz to 2.5, 2.8, and now 3.0Ghz mostly from a change in process. Anyone doubting what FD-SOI could do has been proven pretty comprehensively wrong, it does work and works well too. The A9 core is capable of far more than people expected too, rivaling the top A15 chips for real world work done. That isn’t a bad demo now is it?S|A