MWC 2015: Faster and more efficient than contrast, plus benefits

Fotonation was showing off their facial imaging based fast focus technology at MWC this year. SemiAccurate saw a demo and got the details on this interesting bit of technology at the show.

The idea is simple enough to explain, instead of the usual contrast based focusing that hunts back and forth, Fotonation’s version uses computational imaging to do the same job faster. In this case they detect a face in the image and use a combination of 60+ features and points to determine focus, they are visible in the demo below. 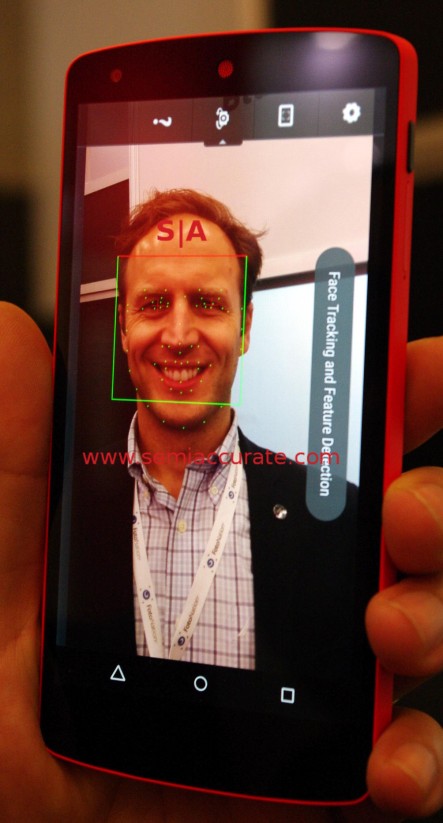 Not a skin problem, focus points

Doing such computational imaging is quite possible with the power available in a modern smartphone, a GPU or ISP is more than capable of the task. It would however add latency and take a large amount of energy to accomplish. That is why Fotonation uses dedicated hardware for the task, a block they call an IPU or Image Processing Unit. This block pretty tiny by modern standards using a mere 330K gates to do the job while using 6mW or so. A GPU is obviously much bigger and consumes more energy but you can assume most SoCs will already have one on board.

Other than energy use, Fotonation claims their tech will do the job much quicker than traditional methods, <30ms with their hardware on die vs 90-100ms without. The company claims it will focus in about 1-3 frames vs 10 or so with traditional methods and it also avoids the back and forth seek. In demos at MWC like the one pictured above, it did seem to work on faces, and if there is no face in the image, you can always fall back on traditional methods.

Technology like this is pretty hard to evaluate at a trade show but since the Fotonation ISP is included in the new Samsung Galaxy S6 and Alcatel’s new high-end Idol 3 phone, you can assume it does. Companies like Samsung and Alcatel don’t license something much less put it in hardware without running a fair number of in-depth tests.

There are also a bunch of added goodies that the ability to detect and analyze facial features adds to a device. As you might guess, facial recognition is at the top of the list, if you can pick out 60+ features on a face, hashing that into an identifier is pretty simple. The same goes for augmentation and related ‘touching up’ tasks but at the moment focus is the only one actively used in phones. Since the hardware is there, don’t be too surprised if there are new features added in with firmware updates to existing devices.

In the end the Fotonation facial focusing is a pretty interesting use of computational imaging for a direct user facing task. Rather than a nebulous promise of nirvana and trains arriving on time through computing buzzword du jour, this one actually does something useful. More interesting however is that they implement it as dedicated hardware vs soft or firmware using existing GPUs or ISPs. Consider it another point in the dedicated vs generic hardware debate, but this one has real world benefits.S|A