Another professional video card comes out

What do you get if you paint an AMD RX 5700 GPU blue? The new Radeon Pro W5700 workstation graphics card.

SemiAccurate would love to tell you something more interesting than painting a card blue, and using the Pro drivers, but there really isn’t anything to tell. There were a few interesting sounding features around VR, remote work, and multitasking but they are all Windows specific and proprietary. This mean they are nothing more than a bullet point that won’t be around for long. Other than that we can’t tell you very much other than the specs below. 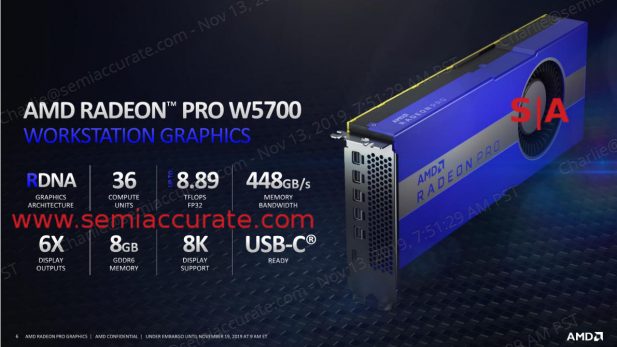 Some of the specs

As you can see this card still has 36 CUs which means it uses RX 5700 sans XT silicon before the paint job but we have no idea how fast it clocks. AMD for some insane reason didn’t put this in the briefing and we have not got an answer back on that front before publication. They did say it costs $799 though and has a 200W TDP fed by a 6+8 pin configuration.

If you are wondering why this is 20W more than an RX 5700, blame the USB-C port which can supply 15W, if you don’t use this it is a 185W board. That is about the only interesting thing we can dig up. We have no idea what the memory frequency is, that isn’t in the presentation either, but it does use 8GB of GDDR6. So now you know what you get when you paint an RX 5700 blue.S|A