Better binning but not much more

Today AMD is letting us talk details about the Ryzen 3000XT CPU updates. SemiAccurate thinks these newish CPUs are an interesting exercise in silicon binning but not much more.

I know people were expecting the next generation AMD Milan/Ryzen 4000 CPUs about now but you will have to wait a bit for them. SemiAccurate exclusively told you when those chips came back from the fab last summer and we fully expect it to debut this year. Until then we get the Ryzen 3KXT parts, specifically the 3900XT, 3800XT, and 3600XT. 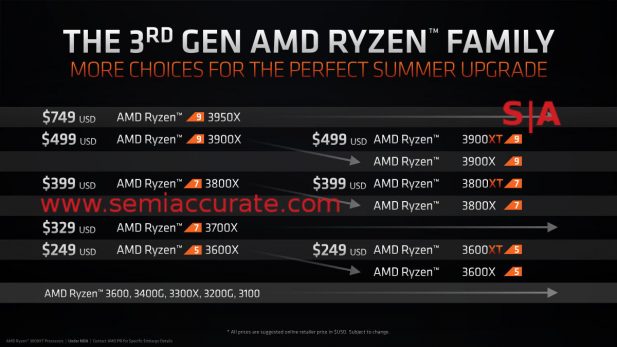 The whole lineup for Ryzen 3000

So what are they? Imagine you are using a process like, oh, say, TSMC’s 7nm one. As time goes on those plucky engineers in Hsinchu optimize things, tweak the process, and get better results as engineers are wont to do. It works pretty well, just looks at what Intel is did with the 14nm process, there are a lot of gains to be had by optimizing. 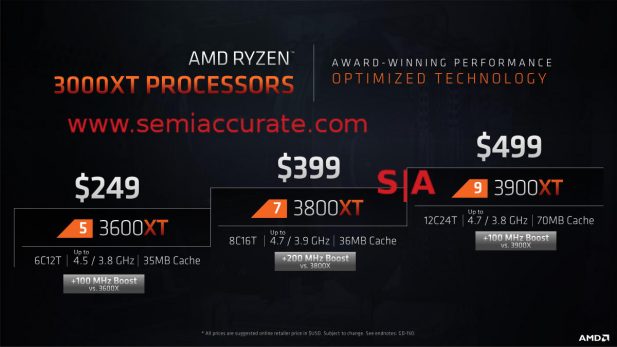 The new chips and their clocks

In AMD’s case the results are not exactly earth-shattering, a 100 or 200MHz boost to the top turbo clock. On paper this seems pretty minor but the results could be a bit better than the low single digit gains intone. Why? Because the parts are on a more efficient process and the R3K CPUs have run enough units for AMD to learn a lot about binning and margins. The end result is a CPU that uses less power and can stay resident in the turbo frequencies a lot longer than those R3Ks without a trailing T.

In short AMD didn’t change the layout, they just used a better optimized version of the current process and binned a lot tighter. The frequency headroom is a result of both advances while the added efficiency is mainly due to the transistors. As you might have guessed, a more efficient processor can be packaged as a lower TDP version at the same clocks or at the same TDP with, well, the same or a little higher clocks.

AMD chose the latter but the key gain is because of turbo. Turbo takes advantage of unused energy and thermal headroom, both of which the XT line has more of. This means more residency in the higher boost states and that directly translates to more real world performance if your app is limited by single thread performance which most are today. If you app is not, well AMD’s R3K line is still your best bet by offering more thread * MHz per dollar than Intel. Basically the best just got a hair better.

Then there is a caveat. As you saw in the prices above, the new XT line replaces the X line at the same price but the top two, the 3900XT and 3800XT, do not come with a heatsink and fan any more but the 3600XT still does. AMD claims that this is because nearly everyone purchasing those top two models also springs for an aftermarket cooler that performs better than the stock AMD version. Since AMD is assuming a better cooler for those two parts, they can optimize the clocks and turbo for that and get better performance, or at least that is the marketing pitch.

Enter the hordes of howling fanbois that are so incensed at this change that the world will end, AMD is sworn to be akin to several malefic deities, and so on and so forth. Ignore these idiots. AMD is right in that most high end CPU buyers do get big overkill coolers for their DIY rigs, that is not a stretch, and we fully believe that the upside via optimizations for these coolers is real too if pretty small. What we don’t believe is that this is _THE_ reason for removing the coolers, just one of them. The main reason? Added margins, can you blame them? SemiAcccurate thinks this was the right decision so just close the basement door and let the idiots howl.

On the minutia side there are a few bits, some good some bad. On the bad side, AMD is going further away from disclosure on their benchmarks, an unacceptable move. Because of this we are not quoting any of their claimed advances and think you should ignore anything they put out until AMD starts doing the right thing like Intel (usually) does. Really guys, get with it, you have regressed long enough.

For the ‘good’ we have a new version of StoreMI, AMD’s SSD caching/storage solutions. Since it is Windows only and we don’t have one, we are not going to make any claims about it. Normally SemiAccurate’s advice on such software is to run for the hills and don’t look back but this time is (slightly) different. StoreMI 2.0 is a read only caching solution so you won’t have catastrophic data loss on every bug like older versions from, well, everyone. StoreMI 2.0 could potentially add a LITTLE speed to badly specced systems but, well, just spend a few more dollars for a bigger SSD and you win.

In the end you have a slightly tighter binned Ryzen 3000 line built on a tweaked TSMC 7nm process, not a new core, layout, or even the 7+/7EUV node. The net gain should be far less than 10%, something that AMD is not over-hyping. If you are having trouble wrapping your head around the magnitude of this advance, if it were Intel we would be going up two generations, the process would add three plusses, and half a dozen paid analysts would be screaming about how this amazing new wonder-chip will change your life. I know which message I prefer.

If you have a Ryzen 3K without a T, should you upgrade? No. Really. Even AMD doesn’t try to sell these new parts as an upgrade path for those chips. The R1K and R2K upgrade path depends more on motherboard compatibility and what software you are using but it is a hard sell. If you have any relatively modern CPU you would be much better off waiting for the real Zen3 based Ryzen 4000 CPUs later this year, the numbers SemiAccurate has seen tells us it is worth the wait. If you are building a new rig now and are planning on a cooler that resembles the Taipei 101, the new XT parts are a good option. If not, go by price, there isn’t that much performance difference. AMD has put out new CPUs that are a little better, and thankfully that is all they claim. How refreshing.S|A