AMD’s Instinct MI300 is much more than a GPU

CES 2023: Pretty much all the goodies in this one

AMD just took the wraps off their Instinct MI300 datacenter accelerator and it is… impressive. This part is basically a competitor to Intel’s Ponte Vecchio in a number of ways and neatly ties up a lot of the rumors SemiAccurate has been hearing for a long time.

Since this is just a preview, don’t expect much in the way of performance figures but the stats revealed are pretty eye-watering. What do we mean? How about 13 dies, four 6nm base I/O dies and nine 5nm compute dies. CPUs? Yup. GPUs? Sure, why not, three of the tiles on top are GPUs, one is a CPU tile, Zen4 of some flavor or other. The GPU tiles are CDNA3, not RDNA3 as you might expect so there are no graphics capabilities on this part. Actually there are graphics capabilities but no outputs so consider it compute only. 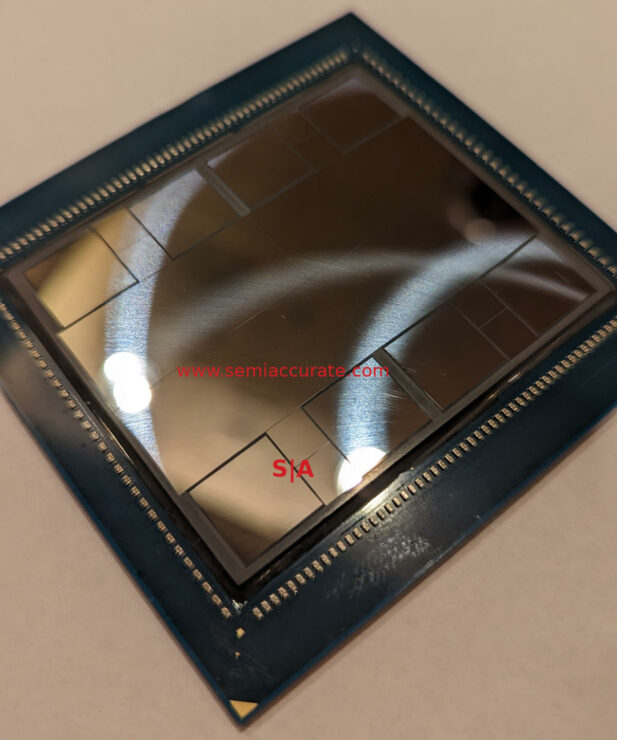 What more do you need?

But what about 3D stacking we hear you ask. Sure, all of those CPU and GPU tiles are 3D stacked on top of the I/O dies too. Those eight little tiles between the eight HBM3 stacks are, wait for it, mechanical spacers. Sorry, something had to be a bit of a letdown. That said if you look really closely, you can see the base die between the cracks. We aren’t really sure how you get to the 9 + 4 number but AMD will be clarifying that in the coming days. That said we do believe it, just can’t point you to a picture of the specifics. 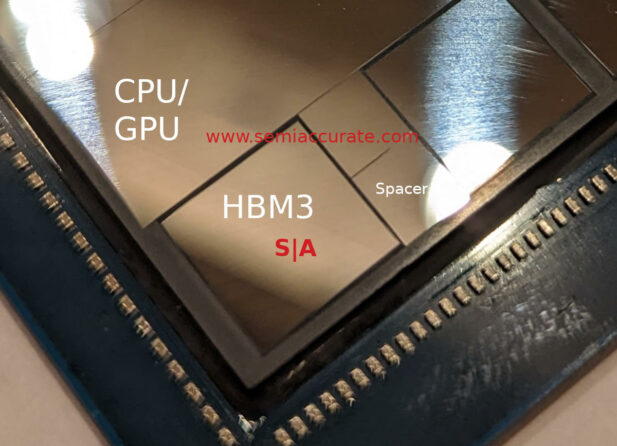 So what more do you want from an accelerator? Nine 5nm tiles, four 6nm tiles, 128GB of HBM3 in eight stacks of 16GB 5Tbps form, and a few spacers thrown in for good measure. CPUs? Yup. GPUs? Yup. Standalone SoC? Nope but it won’t be long before that happens. FPGAs? See previous answer. While it may not be as complex as Ponte Vecchio in some ways, the Instinct MI300 is more interesting in others. This ‘crazy’ packaging is the future, expect more of it, much more and soon too. For now consider us impressed with AMD’s latest 146 billion transistor monster.S|A