VIA launches dual core Mini-ITX board

First Mini-ITX board to feature the Nano X2 E-Series processor.

VIA Technologies has just launched the EPIA-M900 Mini-ITX board in the well-known 17 x 17cm form factor, according to a press release from VIA.

The board is the first to include VIA’s latest nano-processor the Nano X2 E-Series, that is a dual core processor running at 1.6GHz with hardware support for virtualization. In addition there is support for 8GB of DDR3 DRAM. The board also features the VIA ChromotionHD 2.0 video processor based on technology from S3 Graphics that VIA sold yesterday to HTC. 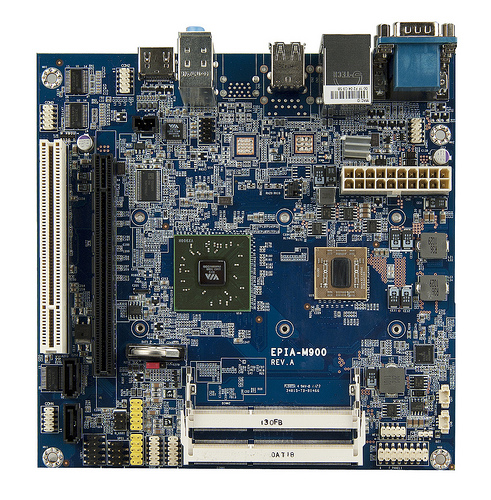 The M900 has a Rear panel I/O includes a Gigabit LAN port, HDMI port, VGA port, four USB 2.0 ports, one COM port and three audio jacks. An onboard PCIe x16 slot (with effective speed up to PCIe x8) and one PCI slot is accompanied with pin headers providing one dual channel 24-bit LVDS support (including backlight control), an additional three COM ports, a further four USB 2.0 ports and one USB device port, LPC support, 2 Digital I/O, SPDIF out and an SMBus header, according to VIA.

According to VIA the Nano processor has a number of uses in embedded designs including POS, Kiosk, ATM, home automation, healthcare and media client system design applications. Now we wait on market uptakeS|A