Power your laptop with a USB cable

One of the few cool things so far at the pre-CES shows has been from the USB-IF, functional USB-PD silicon. Want to see a laptop powered by a USB cable from your monitor?

The demo was pretty simple, the USB-IF booth had a functional USB-PD silicon hacked into a Lenovo monitor and Dell notebook, it was strictly demo time, nothing that will ever be sold. The laptops had no power supply connected but the monitor did. The monitor was feeding the laptop with 65W over a standard USB cable, enough to run it and charge the battery too. The USB PD hub in the monitor has a Displaylink chip in it, so it was acting as a second monitor for the laptop and playing an HD video stream. 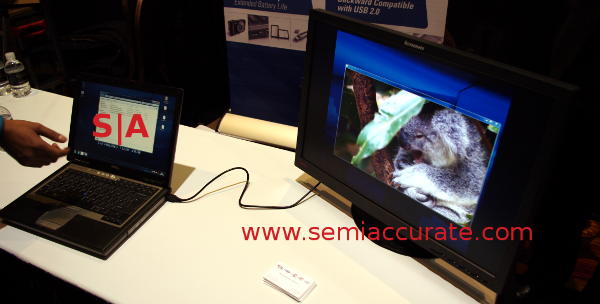 One cable to rule them all, but not lock them in

Yes, you read that right, the monitor was feeding the laptop power, 65W to be exact, and the same cable was running HD video the other way. And yes, it works. No you can’t buy them, and they won’t be on the market until late this year, but they will be everywhere soon enough. If you read our earlier article, you will know the spec goes up to 100W, and with the upcoming updates to USB3, there will be little you can’t do across a dirt standard USB cable. Except become locked in to a broken standard, but we won’t take that potshot here. OK, maybe we will here.S|A